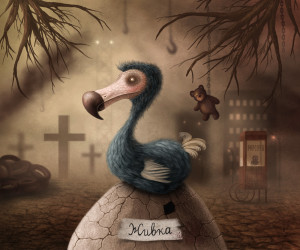 Visual art is its own language, one that allows people to communicate and connect, people who might not otherwise understand each other. The work of Bulgarian designer and artist, Alexander Skachkov, is proof.

Alexander informed me that he’s not fluent in English and I don’t speak any Bulgarian at all, so carrying on a conversation at length is not a viable option. There are actually a few other artists on Other Cool Birds who don’t speak much English, and I’m afraid I don’t speak Bulgarian or Lithuanian or Afrikaans or Japanese or French . . . or any other language fluently at all.

And yet, I feel very connected to these people thanks to their remarkable art. There is usually some element to their respective visual art that allows me to connect on a deeper level than I can with spoken words. Whether it’s the colors they use or the characters they bring to life or the story they tell, I’m often able to establish an emotional connection.

The moment I came across Alexander’s art on Pinterest and Behance, and then on his website, I felt like I was spending time with a kindred spirit – someone with a rich imagination and an interest in unique, often misfit characters. Someone who is a storyteller. A graphic web designer and visual artist for more than 15 years, Alexander’s work is colorful, cool, and a bit Wonderlandish at times.

”Fishing” is a great example of character and story, with the man asleep in a boat that barely holds him, the water is angled suggesting that his peaceful snooze might be coming to a sudden end, the old toothy shark closing in, but look at that shark’s face. The wrinkles, the nose, the almost human-like features which make it much more interesting than if it was just another shark lurking in the deep.

Much of Alexander’s illustration has fairy-tale qualities, and some is more steampunk. He offers a fascinating mix of nature and humanity with neither being quite what we’ve come to expect in the real world. I think it’s the playful imaginings and the, at times, bizarrely cool characters that appeals to me most (like “Unicorn,” “Mr. Pumpkin,” “Thief,” “Blue Bird,” and “Bird” found in the slideshow at the bottom of this page). “Bird,” for example, is not only colorful, but if you look closely you’ll find that the trunk from the elephant being transported has become part of the bird which is quite fantastical. And Alexander’s “Unicorn” resonates with me strongly because of just how un-majestic it actually is, how imperfect. His characters seem to possess an oddball, misfit sensibility that I love!

DORIAN VALLEJO “My task . . . to make you hear, to make you feel - it is, before all, to make you see.” - Joseph … END_OF_DOCUMENT_TOKEN_TO_BE_REPLACED