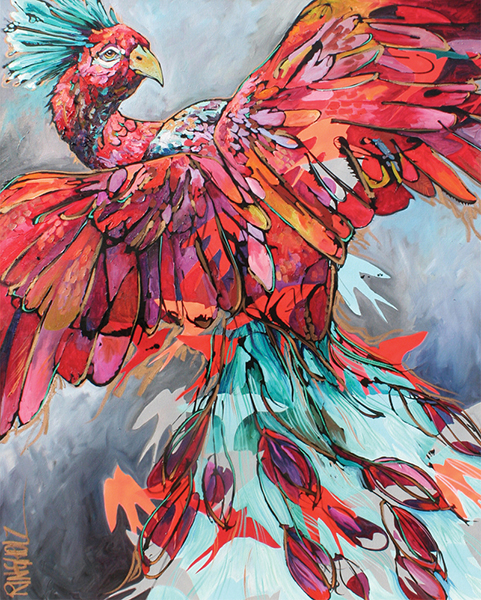 A few years ago, I came across the work of Amy Ringholz at The Rockwell Museum in Corning and I was captivated by the animals, the colors, the stories she shared.

Ringholz, who lives in Jackson Hole, Wyoming, is a painter on a mission to “save the world through art” which is a mission I echo as a writer (as my mission is to have a positive impact on the lives of others through my writing).

It’s been a few years since I encountered the exhibit in the museum, but I find myself going back to Ringholz’s website every now and then for another look at her work.

I’m especially drawn to, and intrigued by, the way she uses dabs of vivid colors juxtaposed against each other to resonate emotionally and visually, to create not just an animal, but a story.

I lack the proper background and vocabulary to talk about art from an artist’s perspective. Simply put, I think her work is remarkable. 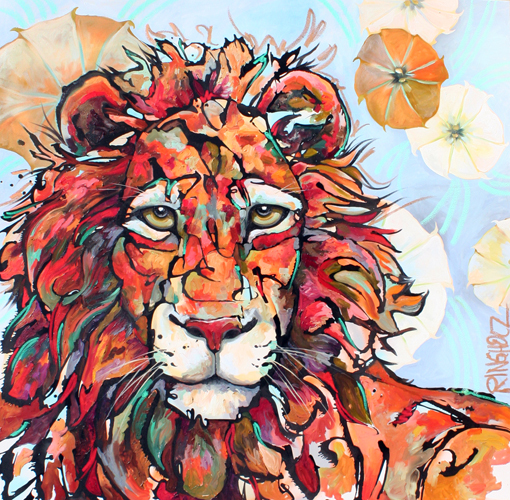 Visit her website and explore the wildlife found there. The swirls of black that outline the wolf in “The Hurdler,” for example, the specific shades of blue used as background, the movement on the wolf, all of these elements tell a story that is both visually and emotional pleasing.

I love the way orange and earth tones contrast vividly with the green background on the painting titled “Keefe” and the colors, shapes and images of “Blindsided With Hope.” I love the colors and the attitude of the owl in “Don’t Look Down.”

Paintings like “Jimson” convey beauty and strength, but the painting is also an homage to Georgia O’Keefe. You can see Ms. Ringholz’s interpretation of O’Keefe’s flowers (Jimson Weed/White Flower) in the painting. 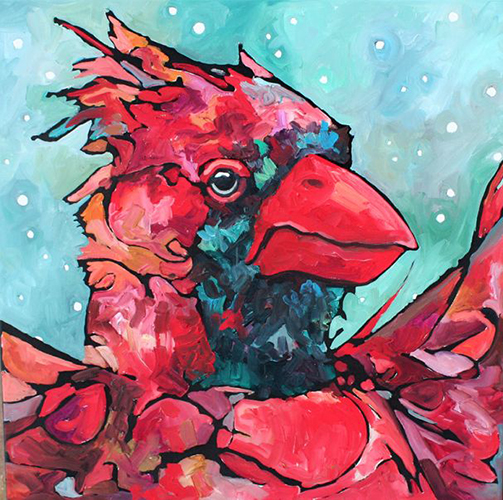 I only recently came across “Heart” which according to Ms. Ringholz, was inspired “by the Queen of Hearts from the wonderland story line.” The cardinal,” she adds, “is loud and handsome caught in a little snowstorm of his own.” The cardinal happens to be my mom’s favorite bird, as it was of her mom, so “Heart” resonates with me for other reasons as well as it’s beauty.

The three animals I encountered in that exhibit at The Rockwell Museum a few years back were a wolf, a bear, and an owl. I happened to have my camera with me that day and took a few photos which I have included at the bottom of this post. The rest of the images were taken from Ms. Ringholz’s website with her approval.

The painting, “Scout,” shows a small owl “caught in a rainstorm of clouds.” Although the owl may be traversing the night sky during a storm which implies determination, I suppose, I sense a gentleness and grace there and I’m not sure if that’s the result of the colors, or the shape of the owl, or if there’s something else entirely influencing my perception. But Ms. Ringholz, herself, states, “He almost has an inner beauty to him.”

Paintings like “Ash” have an intensity to them (between the darker colors she’s used and the eyes, the body language of the wolf), while “On My Own” has a softness and a sweetness. For many of Ms. Ringholz’s animals, the eyes convey emotion and personality, and the colors she uses seem to accentuate these attributes.

Take a moment and watch this video called “How It’s Done” to get an idea as to how she creates each of her wonderful paintings. Maybe it’s because I’m a writer and I tend to work through a chapter in a somewhat linear fashion, though my brain constantly jumps from one scene to another five chapters later and back again. Maybe it’s the way Ms. Ringholz doesn’t just start in one spot and move from there to the next closet spot, but the way that, once she has her basic shape, she fills the portrait in with those colors based on what she’s drawn to next.

Go ahead, check out the video and see for yourself what I mean.

“On My Own” by Amy Ringholz

When I first discovered Ms. Ringholz’s work for myself those years ago, the museum was still called The Rockwell Museum of Western Art and it’s primary focus back then was on traditional art of the West as well as on contemporary Native American art. They often had exhibits of Southwestern Art which is where Ms. Ringholz often seems to be categorized.

As an aside, I think one of the reasons I love The Rockwell Museum is its willingness to bring in so many different styles of art to tell the complex and varied story of America from the perspective of its artists.

But back to Ms. Ringholz – you’ll find her work in Southwest Art Magazine, though originally she hails from Ohio and she now resides and works in Wyoming.

She seems to have taken Jackson Hole by storm, deservedly so, and her work is often exhibited there and in Park City, Utah, among other galleries around the country. To me, that makes her an artist with connections that transcend more than one geographical area. She spends a lot of time outdoors (in the US, sure, but also in places like Africa) studying the relationships of animals, using their stories to tell her own.

And when you visit her site, you’ll find each portrait, each animal has a backstory. I love that. It’s not just about representing a type of animal, it’s about creating or recreating a particular animal, telling or retelling a specific story, and capturing the unique and also the universal in each.

“Don’t Look Down” by Amy Ringholz

I think that is another reason her work resonates with me – the way she is able to transform wildlife with which I am somewhat familiar into something more. The way she’s able to capture each animal’s personality and to present it through her use of color.

Maybe it’s the way those splotches of color are juxtaposed with each other to suggest texture, but also to reveal the emotional essence of the specific characters she creates.

As she mentions in this video, she captures the mood and the relationships of the animals adding depth to the piece, adding an emotional element through which the observer can connect – not just to the painting, or to the story, but to themselves.

Whatever it is about her art that captivates me, I know this – I enjoy visiting her work as often as I can. Take a moment to explore the world she’s created with her animal portraits. I have a feeling you’ll find a connection as well.

To learn more about her and to experience more of her colorful art, you can find her on Pinterest, on YouTube, on her website, and in many other places. If you’re lucky, maybe you’ll get to encounter her as I did, at a museum or a gallery.

Of course, if you’re real lucky and you’re out in Jackson Hole, you might even see her painting live and in person. If you do, make sure you let me know what it was like. I imagine it’s pretty darn cool.

DORIAN VALLEJO “My task . . . to make you hear, to make you feel - it is, before all, to make you see.” - Joseph … END_OF_DOCUMENT_TOKEN_TO_BE_REPLACED