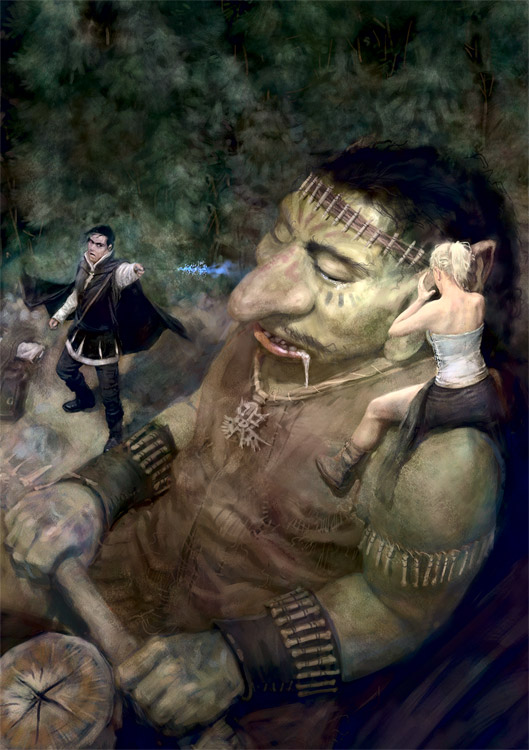 For as long as I can remember, I’ve been a sucker for most anything having to do with Medieval England, Arthurian Legend, knights, wizards, giants, trolls (see image at right), orcs and ogres and goblins, elves and dwarves and quests and, well, you get the idea.

I think that’s why fantasy stories are some of my favorites including the first book I ever read on my own. That’s why I love The Lord of the Rings triology, The Hobbit, Game of Thrones, The Princess Bride, and many others.

That’s also one of the reasons when I discovered the art of Chris Beatrice – he has knights, trolls, giants, squires, kingdoms and adventure, even a gladiator, and so much more – I became instantly hooked.

Of course, it’s not just the content, but the quality of the work that caused me to become a fan of Chris and his art.

My senior year of college, I changed my major from Accounting to English Lit (which meant thirteen straight lit classes). I devoured everything I was required to read and everything I could find and one of those first required books was Mallory’s Le Morte D’Arthur. It was beautiful and enchanting and I had never been transported like that prior to reading. Sometimes art will have that same effect. 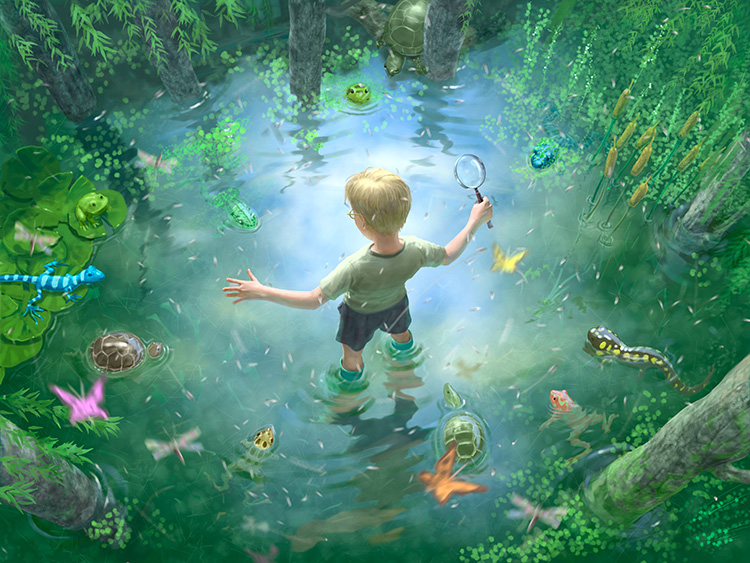 An accomplished, award-winning game designer, Chris has also been involved in illustrating a number of books, including Aesop’s Fables, and he’s also created some iconic literary figures, like Swift’s Gulliver (see below) and DeFoe’s Robinson Crusoe and Wilde’s Selfish Giant, as well as various characters from folklore, fairytales (like Little Red Riding Hood), and mythology.

There are actually so many illustrations that I want to show you here that I could create an entire gallery to Chris’ work, but the wiser thing would be to direct you to galleries that already exist (you’ll also find a few illustrations of Simon and his falcon, like this which is one of my favorites).

When asked what he’s illustrating for, Chris replied, “I’m just compelled to do it. It’s more like I can’t stop. I can’t not do it. It’s kind of how I talk. Also I can’t hear a story without immediately seeing images of it in my head, which is true for many people I guess, but in my case I’ve always had the need to get those out.”

One of Chris’s responses to a recent email exchange might explain why his work resonates with me. To use his words, I can’t tell if his illustrations “rekindle my childhood memories of those types of stories, or if there is just something about those elements that I automatically respond to, and that’s why I was drawn to them as a child.” 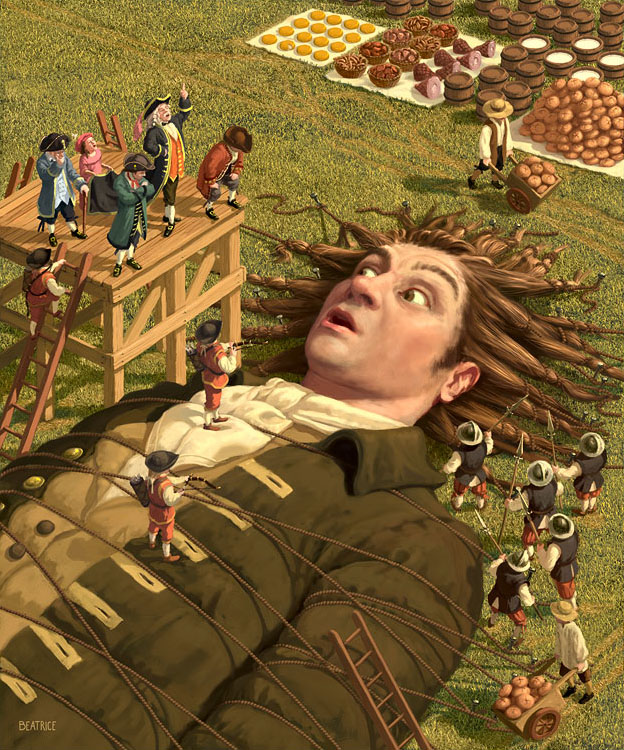 “Gulliver in Lilliput” by Chris Beatrice

Me: I imagine it was fun to work on classics like Gulliver’s Travels and Robinson Crusoe. If you could work on any art project (illustrating a specific book, developing a personal idea, helping on a historical piece of art) what might it be and why?

Chris: “Classic fairy tales, Brothers Grimm, Russian / Romanian / Eastern European. I’m not sure why those stories move me so deeply. It’s one of those “which came first, the chicken or the egg?” things – I can’t tell if these stories rekindle my childhood memories of hearing them, or if there is just something about them that I automatically respond to, and that’s why I was drawn to them as a child.”

“Part of the reason for that is probably the early Disney films like Snow White and Pinocchio. Snow White is actually quite raw when you go back and watch it today. Before that movie, the idea that an audience could get attached to an animated character, be scared by an animated movie, etc., was unheard of. So in some ways they overcompensated! But the result is something like the spirit of the original stories, which are naïve and innocent at the same time they are brutal and horrific”

“When I was a kid it was before the Disney renaissance of The Little Mermaid, Beauty and the Beast, Lion King, etc. and also there really weren’t a lot of other animated features by studios other than Disney, like there are today. Pretty much all my personal work, including my sketchbooks, are pictures of fairy tales. Though I appreciate the recent resurgence of fairy tale themes, though, I am kind of sick of the whole ‘fairy tale characters as adults’ or the . . . realism-based interpretations of them, or the ones where fairy tales are turned into standard fantasy, which they are not.” 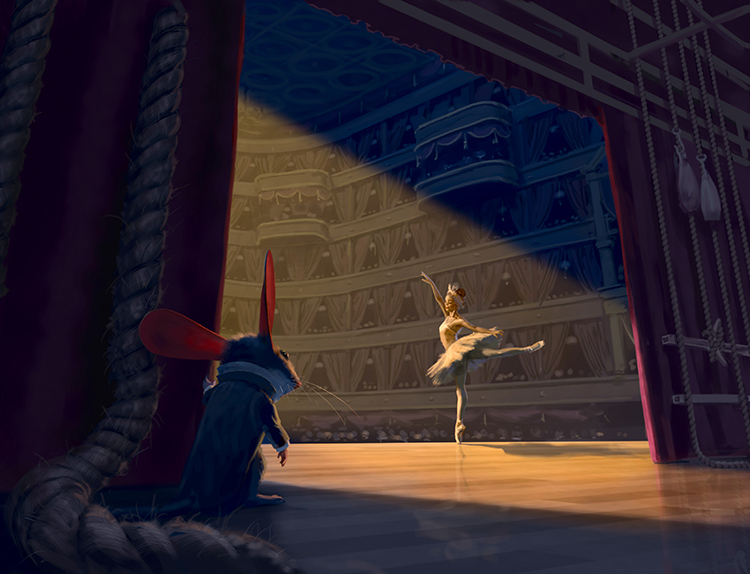 Maurice’s Valises is an ongoing series created by Chris that has adventure, as well as some intriguing characters.

One of the things that impressed me most about Chris’s work, aside from just how wonderful the illustrations are, was his instructional blog which contains several in-depth explanations of his process for specific pieces.

If you like making pictures or illustrating, you’ll want to take a look. Even if you don’t draw, I highly recommend checking out Illustration Fixation (for example, here’s a post on his work illustrating The Selfish Giant and another on Snow White and Rose Red). 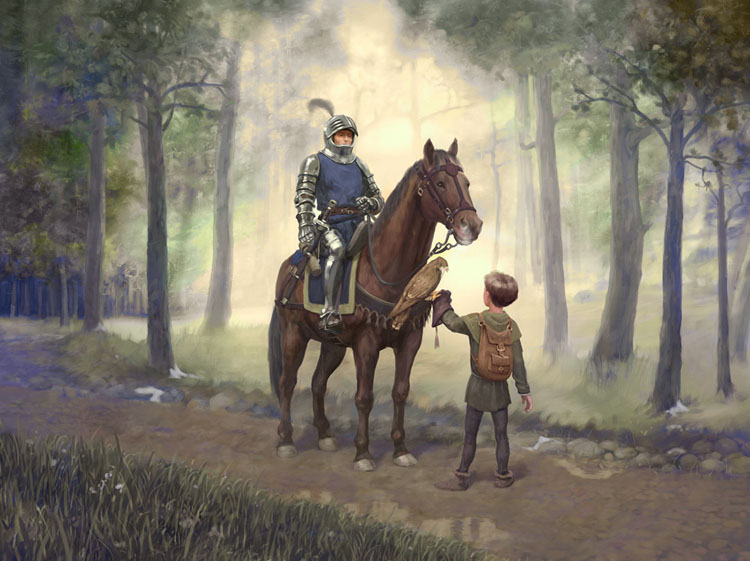 In addition to digital painting, Chris also paints in oils, but not usually for commercial jobs anymore. “It’s just a bit less flexible for the way things work for me these days,” he claims. Before oils, he worked in acrylics.

“I still draw in pencil a lot,” he adds, “mostly because it’s convenient, and a lot of creative ideas come when I’m not sitting in the studio. Physical media are also much more precise in terms of the tool aligning exactly with the mark, which makes them really good for working small, and small is really good for quick ideas and thumbnails. So most of my roughs and thumbnails are in pencil, which I then scan, modify as needed, and paint into digitally. But the pencil stage for a full painting is quite rough, as you can see from the attached works-in-progress.”

Click on the slides below for a better look at the progression of illustrations Chris created to get the final “Simon Meets the Knight.”

DORIAN VALLEJO “My task . . . to make you hear, to make you feel - it is, before all, to make you see.” - Joseph … END_OF_DOCUMENT_TOKEN_TO_BE_REPLACED