“A self-taught artist, Frank Morrison began his career as a pre-adolescent graffiti artist. As a member of a break-dancing crew, while touring Europe, he visited the Louvre museum in Paris and was inspired to choose painting as a career. His work is steeped in old world values of family, community and religion though typically rendered with mirth and high-spiritedness.”

While exploring the Newberry, Caldecott, and Coretta Scott King award websites late one night looking over the titles of books, as well as the names of writers and illustrators, I came across the name of a Coretta Scott King award-winning artist whose work is so cool, and urban, and unlike anything else here on Other Cool Birds that I had to reach out to him and see if we could include some of his art here.

His name is Frank Morrison and his paintings are rather remarkable.

“Every artist dips his brush in his own soul,
and paints his own nature into his pictures.”
– Henry Ward Beecher 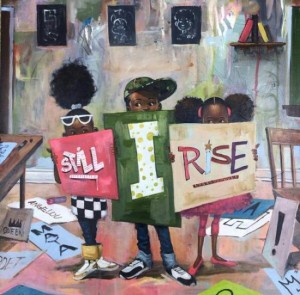 “Still I Rise” by Frank Morrison

Family and faith are important to Frank Morrison the man and the artist, and those two themes come through in much of his work, but I’m especially drawn to the playfulness and the musicality of his paintings; to the way he uses color; and to the way he examines tradition, as well as the everyday.

As a writer of Middle Grade and Young Adult fiction, I have an affinity for interesting characters, for unique personalities. Frank Morrison delivers these is droves. Just examine the trio of young people in the special tribute painting “Still I Rise” that he recently created in honor of the late Maya Angelou. Look at the body language, the colorful signs, the various scraps strewn about their feet.

Regardless of where you live, regardless of your age or your ethnicity, chances are you know some of the characters depicted in Morrison’s paintings. There’s mischief. There’s strength. There’s boldness and pride. There’s musicality and movement, playfulness and passion.

I was a teenager during the late 70’s and early 80’s, a time when graffiti and rap music and break dancing were all becoming more and more a part of mainstream pop culture. These various forms of creative expression were rooted in urban life and were to me, a boy from a small town in rural upstate New York, quite fascinating. They were the stuff of story and had an almost rebellious air to them, an edginess that seemed primal and sensual and based on the body, on movement, on a colorfulness and a flash and an indefatigable confidence born not in spite of, but out of, being different (what has become a major theme in my own writing). 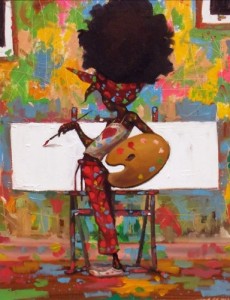 “The Studio” by Frank Morrison

I watched every break dance movie that came out, bought the sound tracks on 8-track, listened to (and danced to) the rap of the day, including “Rapper’s Delight” by The Sugar Hill Gang, largely considered to be the song that popularized hip-hop in the US. I watched movies like New Jack City and soaked up as much of this new movement as possible.

Of course, it was new to me since I lived in that small upstate town, but all these things were in many ways reflections of daily life in urban America. And I believe that element is what spoke to me the most.

As I later discovered with novels, these genres of art were a way for me to learn about a world I had never seen. They were a way for me to connect, perhaps, on a more intimate level with people living lives quite different from my own, yet, at least to some degree, similar to mine as well. After all, there were varied family dynamics and complicated friendships. There was love, as well as a struggle to fit in. There were varied consequences of being different. There was music and art and dance, all of which resonated deeply within me. And, at times, there was basketball.

I had no idea when I first encountered Frank Morrison’s work, that his young life wasn’t just touched by the mainstream presentation of break dancing and rap music and graffiti the way mine was, but that he was fully immersed in those very things.

As “an energetic pre-teen, he was interested and enthused by the youthful fads, interests and activities which marked his world: the neighborhood DJ’s with their followers and fans at neighborhood parties, the colorful ‘tags’ of local characters which were splashed across fences, parks and buildings, and the loose-jointed ‘B’ boys and break-dancers who enlivened week-end party scenes. In this setting his world was suddenly rife with possibilities and he became convinced that he, too, could DO this!”

It makes sense to me now why I was immediately drawn not just to the variety of Morrison’s subjects, but in particular to the wonderful way he uses curves to create movement and personality. Leave it to a former dancer, to someone so attuned to his own body, to capture the fluidity and sensuality, the grace and the strength conveyed in the way a person moves.

There’s pride and honor in his characters. There’s also some sass and some diva moments and some above-the-rim street balling action. And something about each of those appeals to me. Part of that is due to those intriguing personalities, those attitudes he captures so well, and part is due to the various forms of juxtaposition in his work (just look at “Hip Hop and Heels” for an example of that).

Whether it’s words on a page or abstract ideas or the myriad jutting angles found in a forest or the frenetic arms and legs on the blacktop, I love juxtaposition and you’ll find so much juxtaposition in Morrison’s work.

His art has graced the covers of over twenty books and he’s been awarded the prestigious Coretta Scott King award and other awards for his ability to capture the essence of people and of life. 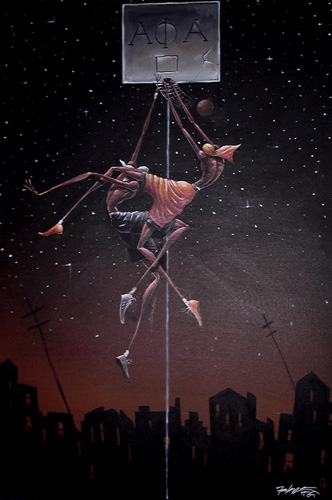 “Alpha Fly Slam” is just one of Morrison’s urban basketball paintings that immediately transports me back to the early 80’s when I spent countless hours on the blacktop, though I didn’t play above the rim like the athletes in his paintings.

As a former student who both excelled in the classroom and who had moments of duncehood, I also feel a profound connection to chalkboard moments like those found in “Arithmetic” (below) and “Social Studies” (at top).

I remember those kids from school.

Okay, having occasionally been one of those kids, I end up smiling every time I examine those paintings as Morrison captures the attitude such students might have exuded prior to being called to the front of the room. Not to mention the ones they convey while they’re there.

Morrison has a few paintings that feature birds as well, and although the birds aren’t the dominant image they do compliment the flow and the personality of the humans with which they’re engaged, paintings like “Nia” (at bottom) and “I Believe I Can Fly,” which I had to include here as they reveal his deft touch when it comes to the use of color and to the use of curves to create movement.

“I Believe I Can Fly” by Frank Morrison

There’s a sensuality to Morrison’s work (a result of those curves mentioned above and of anatomical exaggeration), there’s a playfulness, a confidence and a strength, all of which seem exaggerated at times, yet feel quite realistic.

I’m so glad I took the time that late night to not just skim over the names of artists on the Coretta Scott King website, but to visit many of the artists’ websites and to explore the worlds they’re creating, in particular the world and the art of Frank Morrison.

A few other paintings by Frank Morrison that struck me (an there are so many):

DORIAN VALLEJO “My task . . . to make you hear, to make you feel - it is, before all, to make you see.” - Joseph … END_OF_DOCUMENT_TOKEN_TO_BE_REPLACED