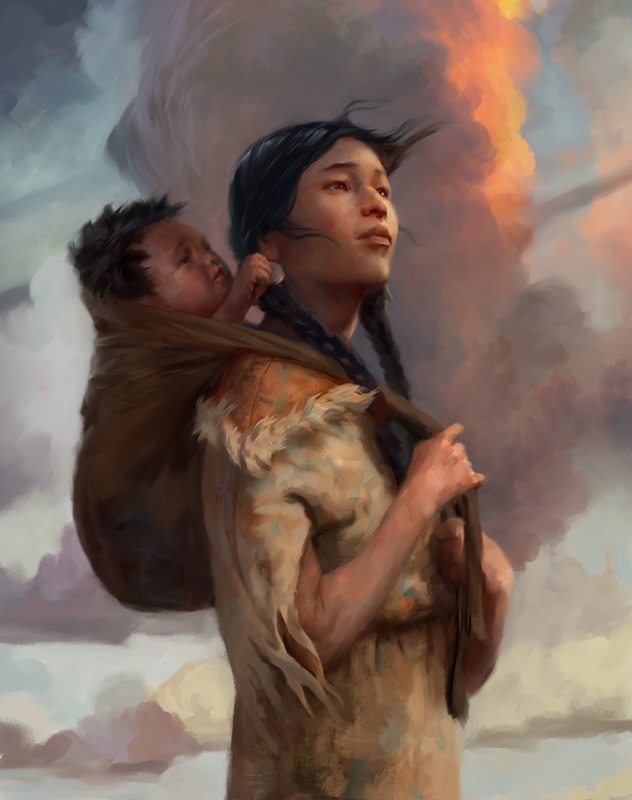 Sometimes an artist transports me through time, takes me back to a certain period from my life. As a result, in addition to my appreciating the work itself, I get to enjoy an array of wonderful emotions associated with my past. Jon Foster is one of those artists.

Yeah, he ain’t too shabby!

He has illustrated many book covers and has also created a variety of robot oil paintings. It was while I was working on a special post of Robots for Other Cool Birds a few years ago that I first encountered Jon’s fabulous automatons, which also allowed me to discover his other awesome creations. 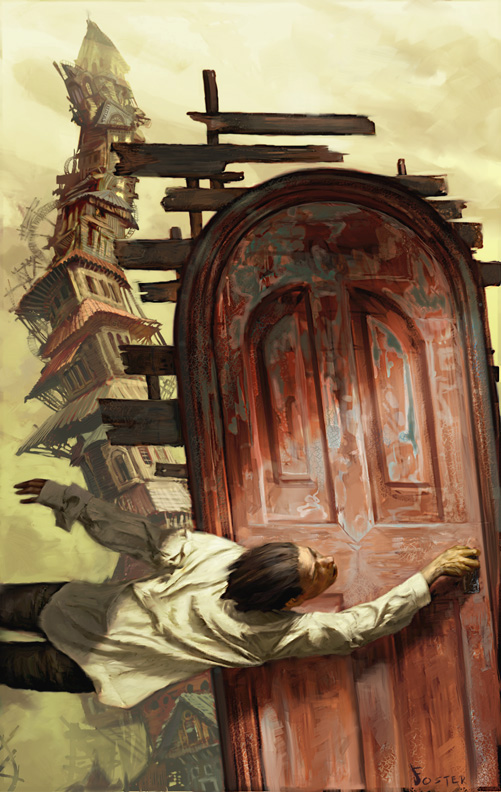 I am especially drawn to the fantastical and sci-fi elements of his work which at times reminds me of covers of those novels back in the late 80’s and early 90s which first turned me onto reading.

Jon’s covers for Conrad’s Fate and The Devil You Know are, at least to me, reminiscent of that supernatural tone found of the covers for the Incarnations of Immortality series by Piers Anthony and a number of books by Douglas Adams.

Jon’s cover for The Fire Chronicles (see below) remind me of covers for books by Anne McCaffrey, as well those by Margaret Weis and Tracy Hickman whose novels were some of the first I read, when I finally gave in and started reading outside of school at the ripe age of twenty-six.

Since the robot post, however, I learned that Jon’s art has appeared on such a diverse range of projects, from a National Geographic cover about “Reviving Extinct Species” to work for the MTV television show Teen Wolf (I admit, I watched a couple seasons of the show which featured young actors like Dylan O’Brien who has since gone on to staring in the Maze Runner movies based on dystopian books by James Dashner). 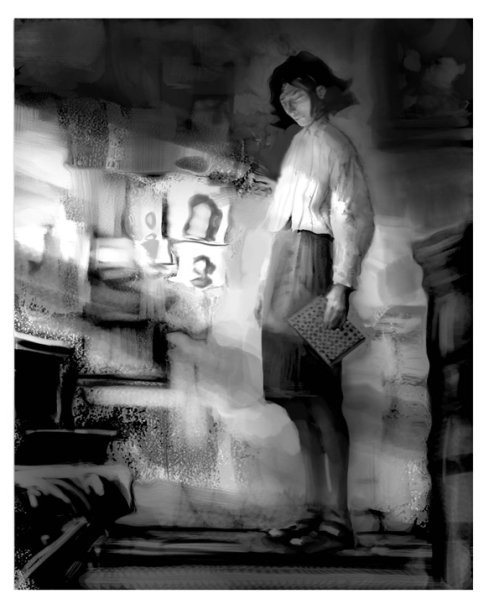 Jon’s concept work is also compelling, from images like the village found in the gallery below to those pieces based on Anne Frank.

In the latter, I love the way Jon plays with darkness and light from which I infer both the dismal setting of the story, and a sense of ruin that transcends one particular room and touches the world itself. Yet he also intimates a small sliver of hope, perhaps, a sense of triumph despite Anne’s inescapable doom.

I love the lack of clear details on Anne’s face and those faces on the wall, intimating everything from a systematic erasing of their identities to the universality of their plight (the relevance of the atrocities to all human beings regardless of ethnicity, or even the time in history in which we live).

There’s also an element of softness in the sketches which might imply a certain frailty or impotence and an element of smudged lines that might convey the actual dirt and grime that is simply part of everyday life during a time of war, but also that soiled, ruined world. 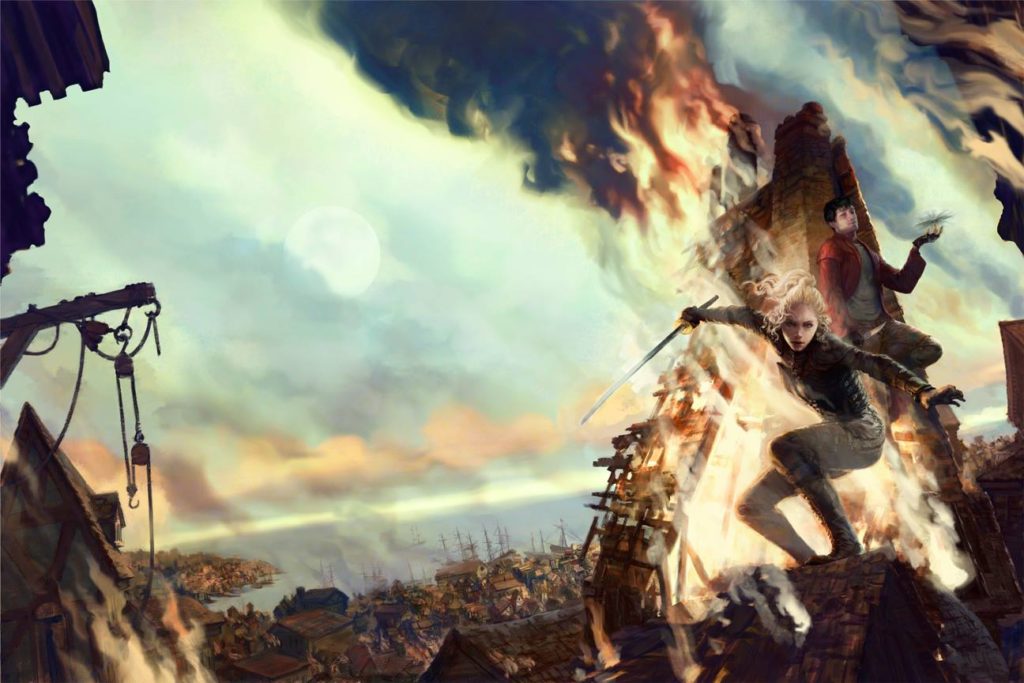 In addition to his inclusion in the Society of Illustrators annual publication, Jon has received two silver and three gold awards from Spectrum: The Best of Contemporary Fantastic Art. Jon also was awarded the David P. Usher/Greenwich Workshop Memorial Award in the Society of Illustrators: Annual 43, has been nominated twice for the Chesley Awards, and was winner of the 2008 Dark Scribe Quill Award for Best Cover.

Jon frequently travels to lecture at various schools around the country, and is also a member of The Illustration Academy Faculty. 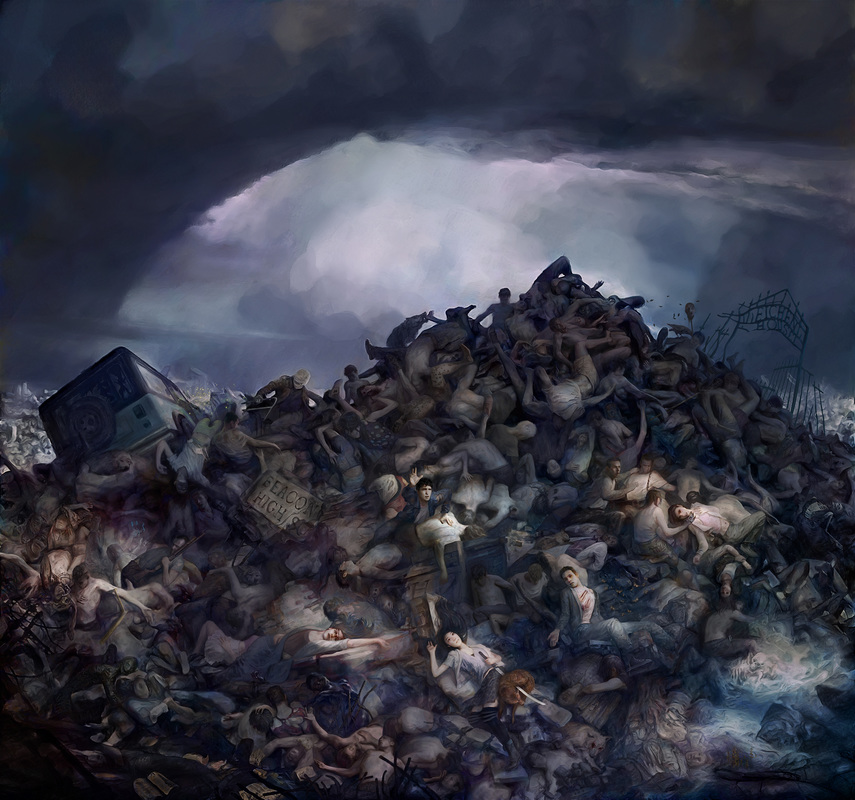 Below is an email interview conducted with Jon a couple years ago. I hope you enjoy his responses, and I especially hope you’ll take the time to explore his exceptional art here in the post, but also on his website and on social media.

OTHER COOL BIRDS: How long have you been interested in art? 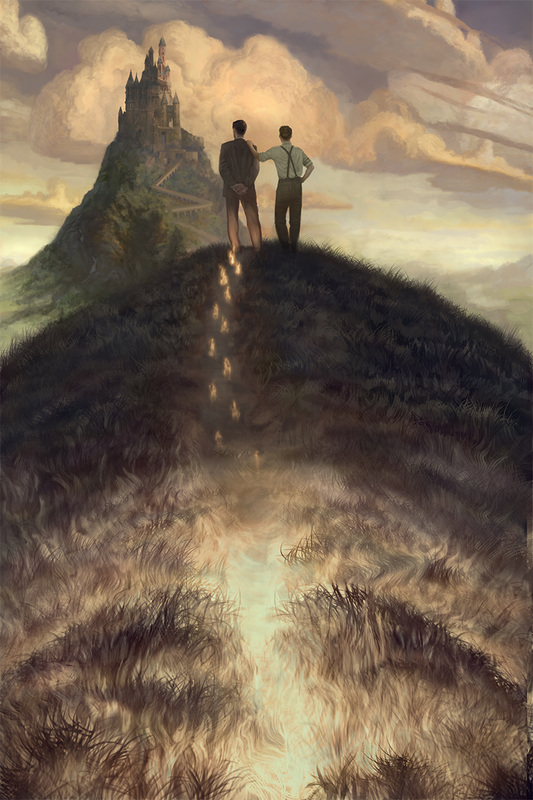 The Devil You Know by Jon Foster

JON FOSTER: I have been drawing since I can remember. I am just incredibly lucky that I was encouraged to continue on after my crayon phase, and even more lucky now to be making my living as an artist. However, I may try to get back into crayons at some point in my career.

OCB: What are you painting for (as in, what’s the deep down driving force behind your choice to paint in the first place)?

JON: I confess, first and foremost I paint for myself . . . it makes me happy.

Beyond that, I love illustrating stories. I have always thought it was fascinating how images accompanied with words can take the adventure to another level. It seemed like a natural career path for me to try and follow in the footsteps of illustrators that I have always admired.

OCB: What is it about the process that you like most? Least?

JON: I love shape, light and compositions.  When these things are brought together just right . . . there seems to be magic in the air.

I can sit and work on grey scale images, moving shapes, changing volumes and light for days. I make a conscious effort to enjoy every part of the creative process. I have found that if I focus on any form of negativity that it will reflect in my work. Instead, I try and convince myself that it is all fun, sometime with better success than other times. 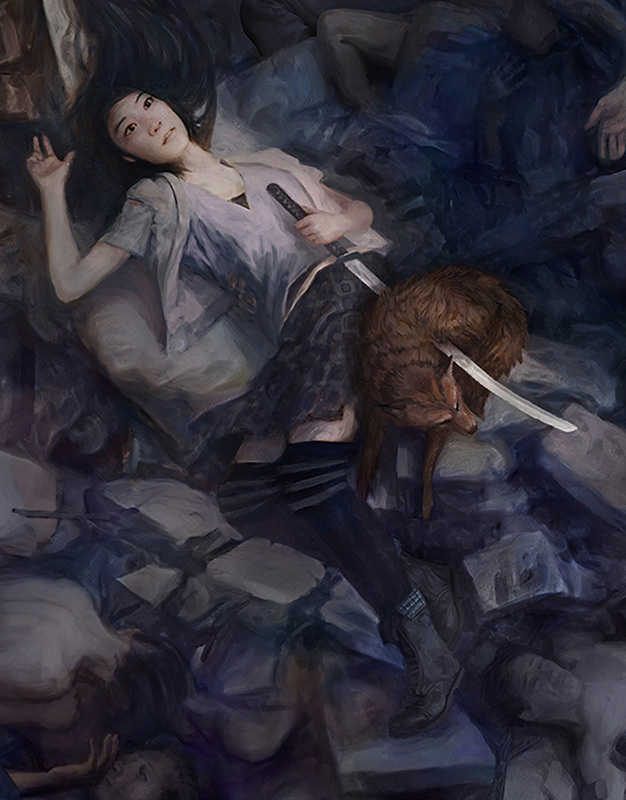 OCB: What sort of subjects do you prefer painting/exploring and why?

JON: The human figure. We go through life relating everything to our bodies as well as other people’s bodies. I think I enjoy illustrating action movements, emotions, the passage of time, and love the most.

OCB: What is your relationship with color?

JON: I don’t feel that I have a good sense of color. I venture into color very slowly from black and white, to monochrome, to tri-tone, and then to full color.

The computer has made my work much more dynamic color-wise . . . as it allows for lots of experimentation, while at the same time, giving the option to press “control z.”

OCB: What is one thing about art you think people might not understand?

JON: Sometimes if it’s not working, you just have to throw it out and start again. 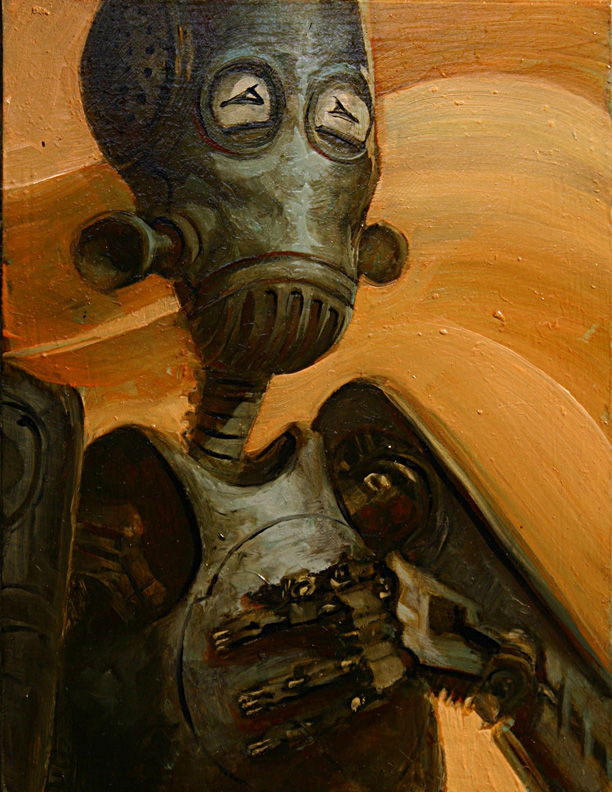 Who Me by Jon Foster

OCB: If you could work on any art project (illustrating a specific book, developing a personal idea, working on a historical piece) what might it be and why?

JON: I am lucky enough to have worked on lots of cool projects, but I have not worked on an animated film yet. I would love to work with Pixar on . . . probably anything they would make.

OCB: What technique/media do you work in most (i.e. the Robot Images in particular)?

JON: The robot images I am most well known for are in oil, but for about the past ten years I have been solely working digitally.

OCB: Do you have any specific upcoming projects for which we should keep a look out?

JON: I have just finished doing the illustration work for opening credits of “The Leftovers” on HBO.

The Fire Chronicles by Jon Foster

I worked with Garson Yu at Yu+Co. They used my images, animated them, and then added music. I am also finishing up a National Geographic piece, that involves one of the earliest, intact skeletons found of homo sapiens in South America. The skeleton is of a young girl from 12,000 years ago. I was asked to paint what she may have looked like seconds before died by falling in a well.

I am also working on several book covers which vary from young-adult covers, to sci-fi fantasy work, to steam-punk (see below).

OCB: Aside from your main website, are there any specific websites with your work to which you’d like me to link back?

JON: You can check out my blog that is on my website. I update the blog regularly with new work.

You can watch Jon do a few demos here. To explore more wonderful work by Jon visit his gallery. Be sure to follow Jon on Facebook and Twitter. 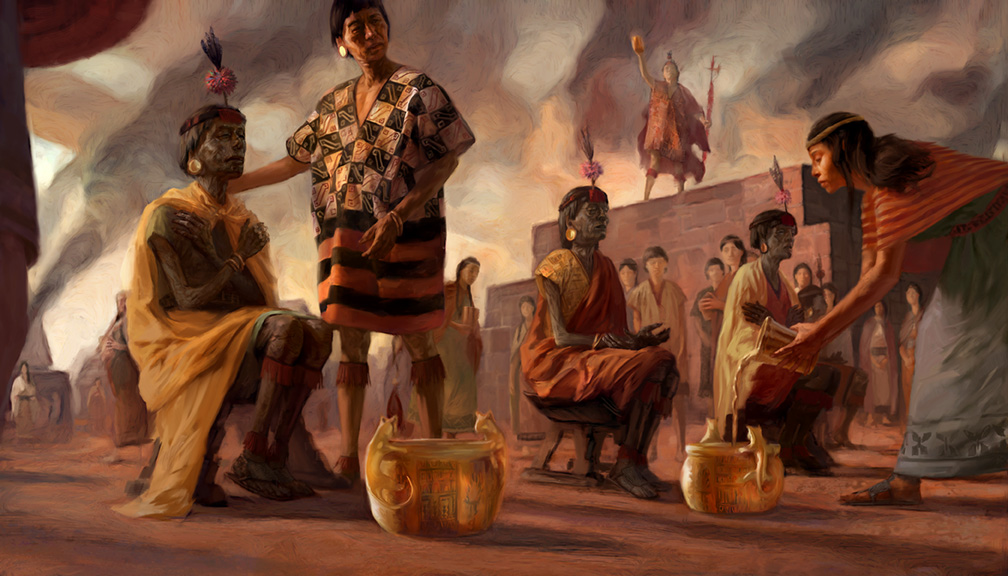 DORIAN VALLEJO “My task . . . to make you hear, to make you feel - it is, before all, to make you see.” - Joseph … END_OF_DOCUMENT_TOKEN_TO_BE_REPLACED