Some say we are made of “star-stuff.” We are made of stars. Of course, we are made of stories, too. Our individual lives are all part of one massive tale (each of us, little more than a scratch, a scrawled glyph, on a random page of a endless tome). And within each life there are myriad events, scenes, happenings—each its own small story.

Maybe that’s why stories are such an integral part of the human condition. As writer Philip Pullman says, “after nourishment, shelter and companionship, stories are the thing we need most in the world.” 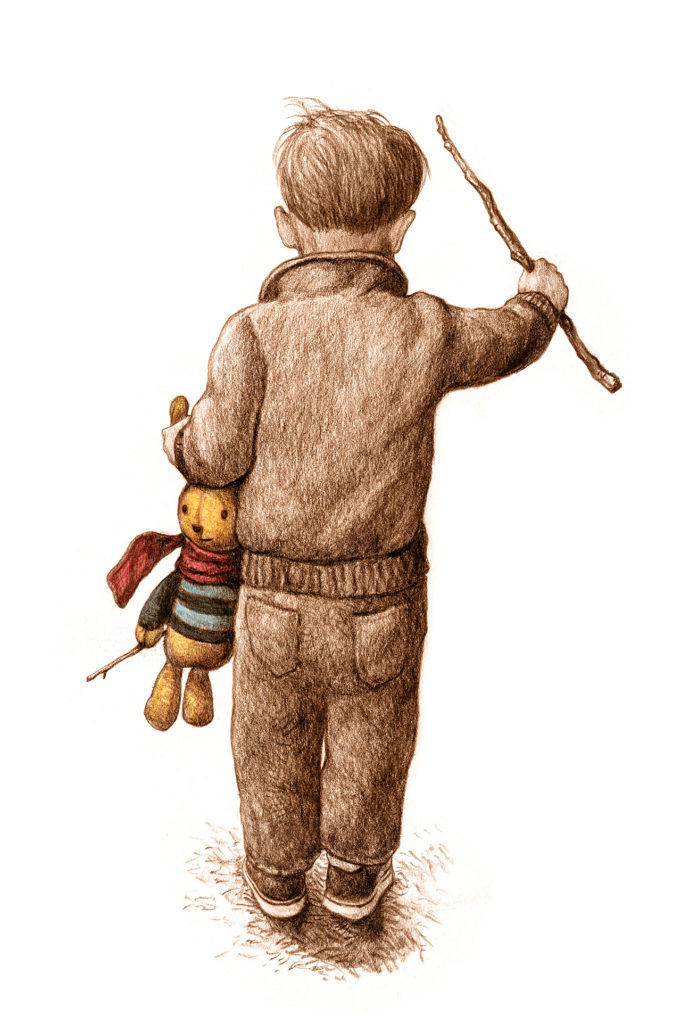 I have dedicated this website to visual art. Each paintings, illustration, sketch, mixed-media piece, scupture . . . conveys a scene, a micro-story, a moment that meant something to the artist, so much so that he or she took the time to express it in a very special way, with a certain intention.

I have mentioned in other posts, that my appreciation for visual storytelling started when I was a boy. My circuits were always set on go-go-go. As a result, I lacked the ability to slow down (or, at the very least, an interest to do so), let alone to be still long enough to read.

But movies . . . wow! Movies moved me. They spoke to me on a different level, engaged my mind in such a way that it felt as if I was still active, as if I was still in motion . . . they somehow found a way to touch me deep down.

Although it would take me over two-and-a-half decades before I realized that words could transport you to other worlds and other lives, as well, for as long as I can remember visual storytelling has resonated with me.

“You connect yourself to the viewer,” Steven Brust says of the artist, “by sharing something that is inside of you that connects with something inside of him. All you have as your guide is that you know what moves you.” 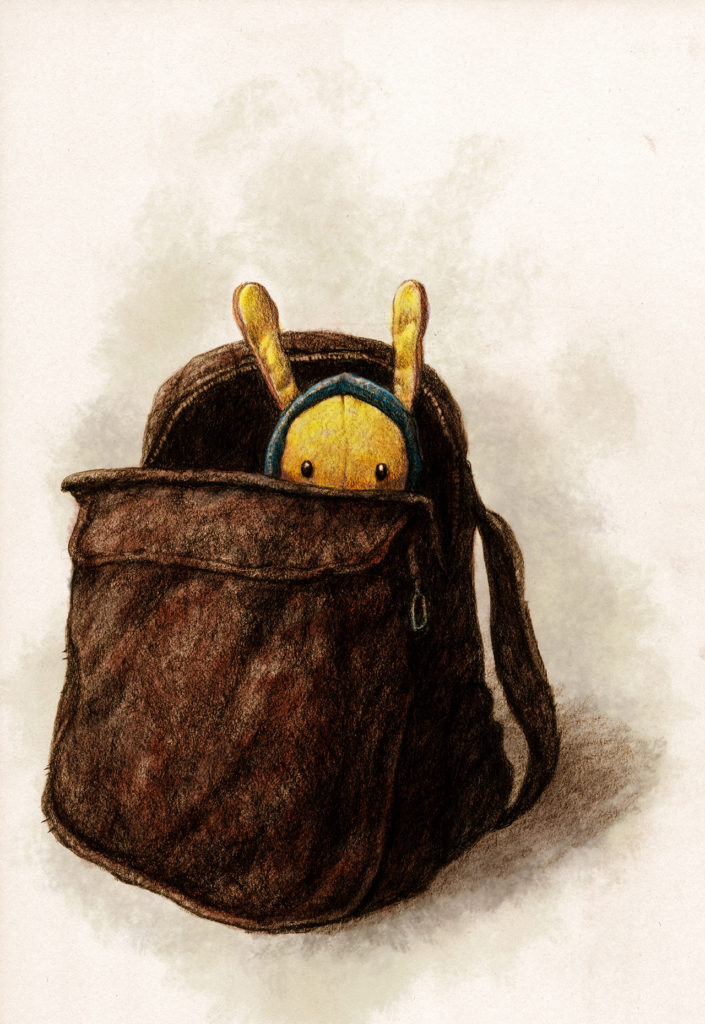 “Ollie’s Odyssey at the Wedding” by Moonbot Studios

That quote captures the essence of why I have invited the artists whose work appears on these pages to be part of Other Cool Birds, because of their ability to share something inside of themselves in such a way that I connect with it, that it connects with something inside me.

These visual storytellers have moved me by sharing what moves them in such a way that each experience has changed me.

I cannot think of a visual artist, or in this case a team of visual artists, who better exemplify that trait than the prodigiously talented artists at Moonbot Studios.

Back in 2011, I happened upon the Oscars (which I don’t usually watch, going back to that can’t-be-still-can’t-sit-still gene I seem to have been born with). The moment I changed the channel and came upon the Academy Awards, they were revealing nominees for the best animated short film and I was immediately captivated by the images on the screen.

The short was The Fantastic Flying Books of Mr. Morris Lessmore. I was captivated, in part, by all those wonderful books in the opening scene and a protagonist whom I perceived to be a storyteller of sorts. By my love for the written word and by that opening scene, the visualization of those books being swept up on the wind . . . of books flying.

It wasn’t just the story (which was without dialogue) that moved me, it was the images . . . for the images revealed the entire story.

After that evening, I went on my way over the next few years without thinking much about that film, until last week when I came upon the website for Moonbot Studios. I noticed a popular figure from the recent Olympics. Then I saw an illustration of Mr. Morris Lessmore and I remembered his flying books.

I spent the next few days exploring the awesome art, and the wonderful stories created by Moonbot Studios and I was, no I am compelled to share them with everyone. 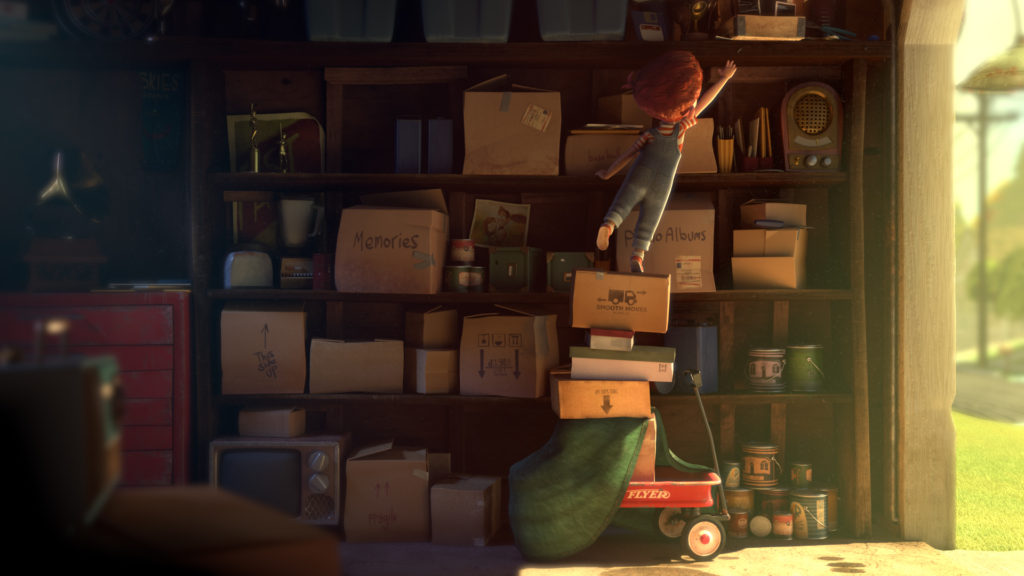 They have a new short film out called Taking Flight.

Before I watched the film (which you can see below), I spent time with the characters in some of the illustrations that make up the film. I imagined what story might be taking place in each Taking Flight image found in this post and each image, each scene by itself, presented myriad possible stories.

For example, in the image above, I wondered what the boy is reaching for, and why. Without watching the film and witnessing the boy’s actual story, I imagined several possibilities which, I suppose, is common since we bring our own stories to each encounter we have with art. I could see my younger self in him. 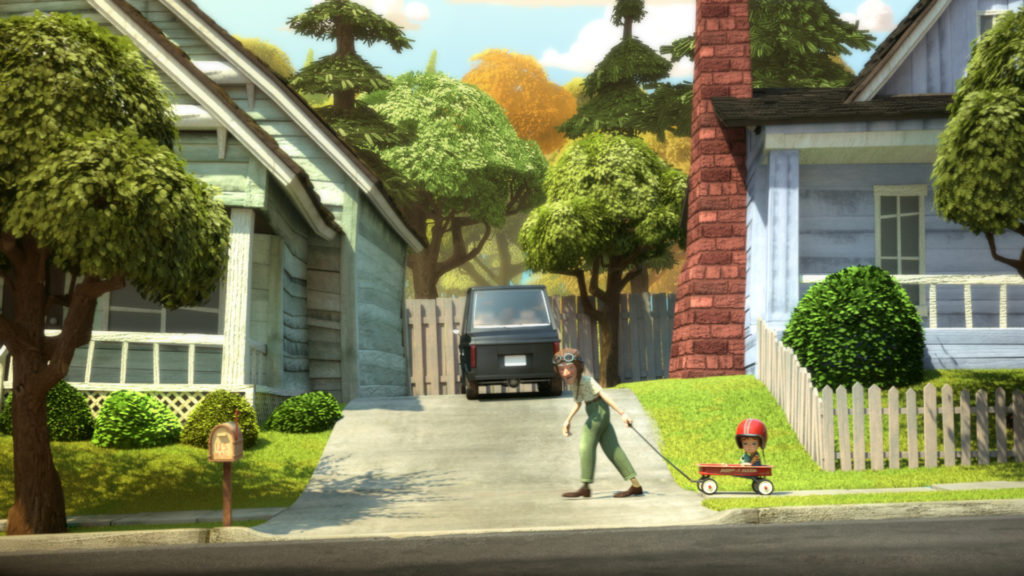 I saw the radio Flyer wagon and remembered my own youth. I didn’t have a red wagon (though I knew boys who did), but I did have a go-kart which was a way for me and my friends to fly. I remembered our adventures.

The wonderful illustrations from Taking Flight and from Ollie’s Odyssey suggest adventure. They suggest a journey, the sort we all take, to discover the world . . . to discover ourselves. They make me think of Campbell’s mono myth and the heroic quest. But also of the imagined journeys we go on. Although I didn’t read as a boy, I did spend hours in my room pretending, carrying out countless missions and battles and stories. The illustration above of the boy with the old man (despite not knowing exactly who the old man is in relationship to the boy) instantly propelled me into the past, to time I spent with my grandfather and my father.

The boy’s stuffed animal (in each of the stories mentioned above) reminds me of many kids I have known with their many special toys . . . the special friends most of us tend to have from our earliest days. There’s a tenderness to the images. An innocence. A sense of adventure. The illustrations, by themselves, are remarkable in their ability to convey emotion, action, story. 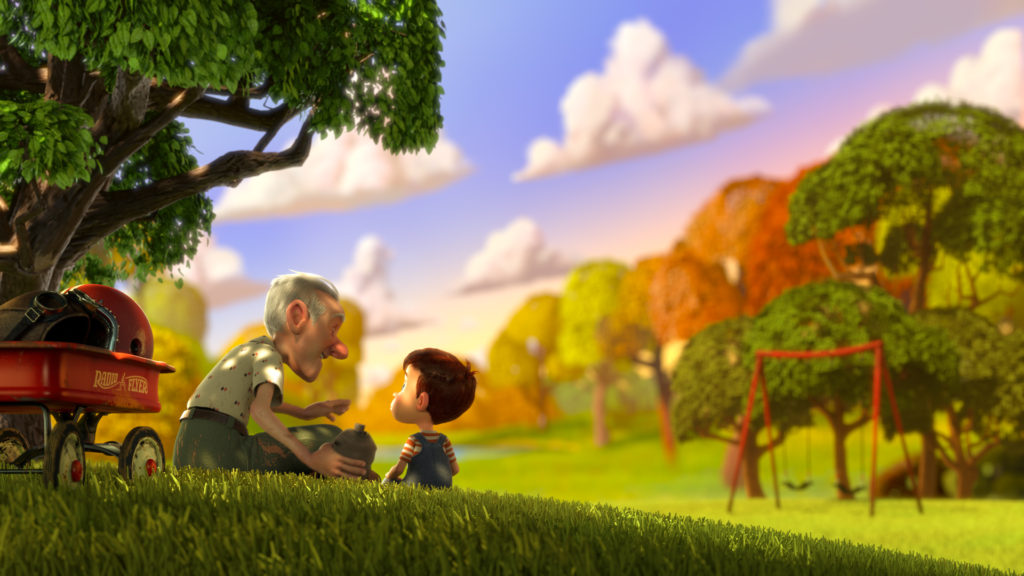 I look at the sample illustrations from Taking Flight and I am moved. The colors, the shapes, the textures, the facial expressions, and all the little details like the swing in the background at the park above, the clothing, the clouds . . . all play a part in the illustrations’ effectiveness for storytelling, for eliciting emotional responses or connections.

But it’s also the way the artists are able to reveal personality in the characters (the boy, his special stuffed toy, the old man’s cap and goggles, the helmet the boy wears, and that wagon). Before you watch the film Taking Flight—which is only a few minutes in length—take some time to explore the illustrations found on this page (a few scenes of a story, taken out of context). And explore the images from other Moonbot Studio projects also found here and, especially, on their website. 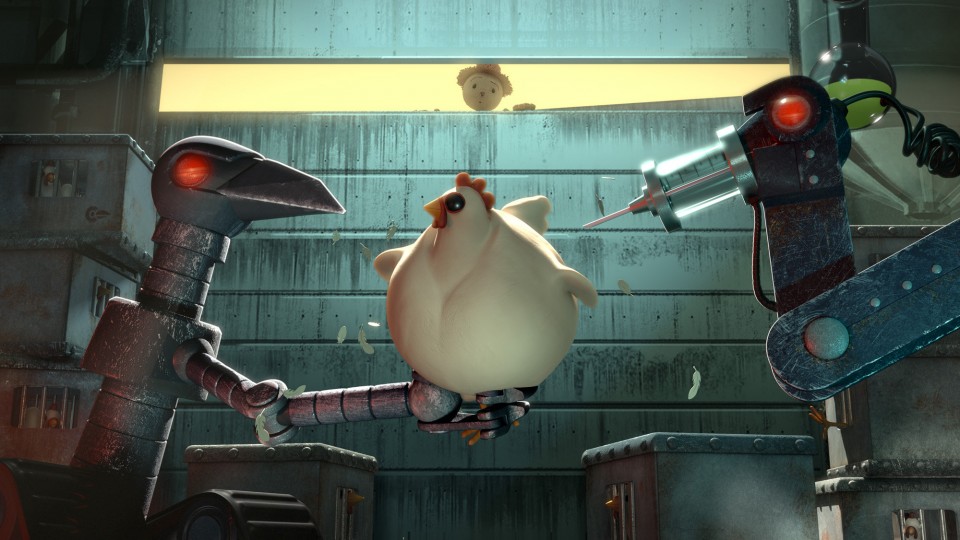 Chicken for Commercial by Moonbot Studios

The illustration above of the boy in the garage, a boy searching for something, oblivious to any danger, compelled to try to reach something—I have been that boy (even as an adult), perhaps stretching further than I had any business stretching.

Even now, with my writing, my own attempt at storytelling, I am reaching . . . stretching myself to my limits and, hopefully, beyond . . . How about the image of a boy with his bear, just the two of them, sitting on that box, looking out onto the world. 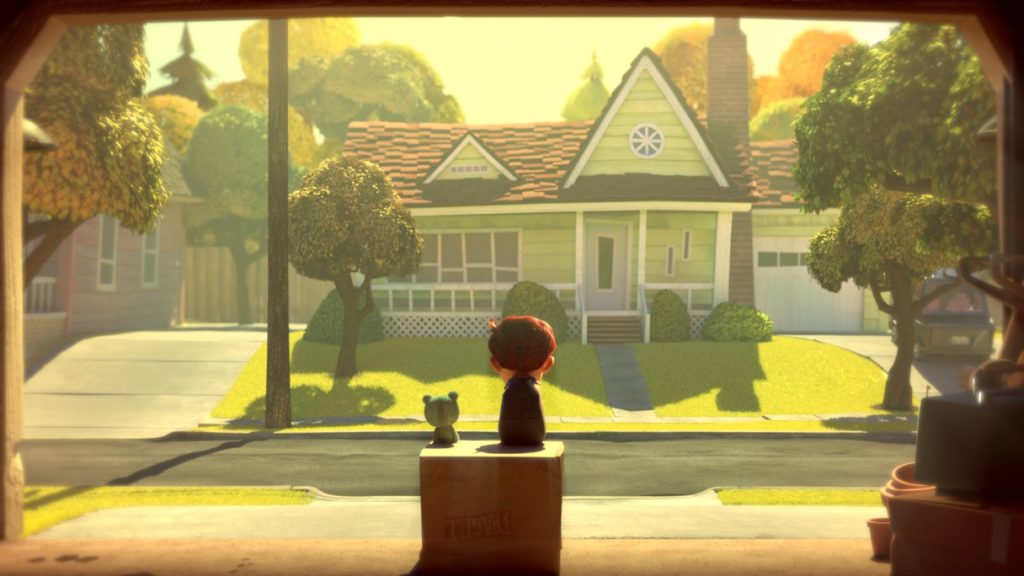 What story do you imagine for that scene? Are they planning an adventure? Starting a new life? What about when the boy and his bear are pulled in the red wagon (also above)? A Radio Flyer wagon no less. Look at that scene. What do you imagine? 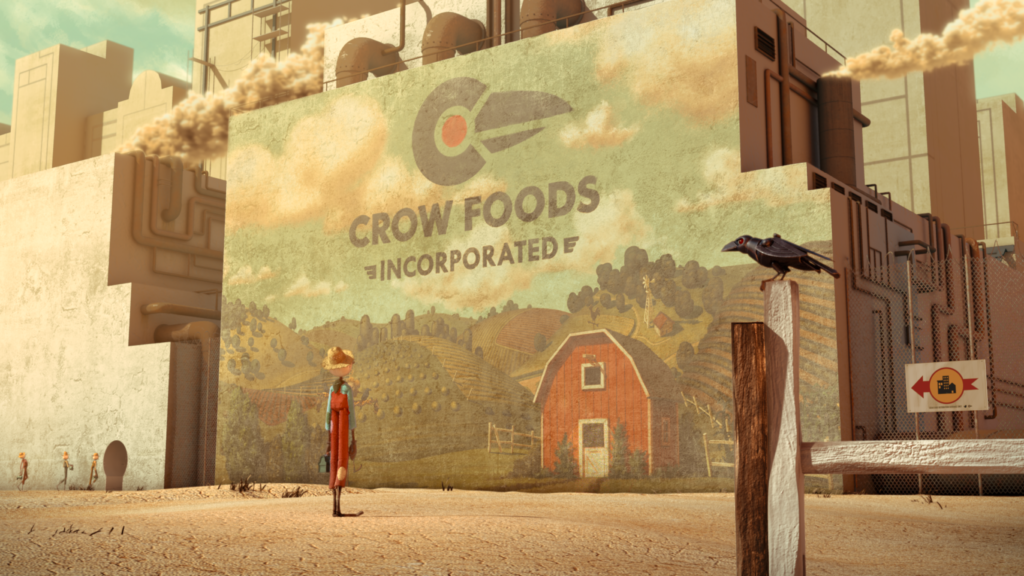 “The Scarecrow” by Moonbot Studios

Look at what the old man is wearing on his head. Does that suggest something entirely different than a flat cap or no hat at all would convey?

When you watch the film, and I hope you do, notice the movements of the boy and of the bear during the scene where they are on the large box. Notice how the artists don’t tell us, but rather show us how the boy feels (mirrored cleverly and, thus, further reinforced, by the bear). The illustrations from this film suggest to me a sense of adventure, or at least that of an adventurous spirit. There’s a certain sense of playfulness. And a dozen possible conversations between the old man and the boy at the park run though my head.

What sort of stories do you think they are sharing?

The beauty of visual art, especially illustrations like those created by Moonbot Studios, is its ability to connect with us, to resonate with each of us on different levels for different reasons. And that’s one interesting difference between looking at still photographs or individual illustrations versus looking at moving images—when looking at stills, the viewer tends to weave in his or her own stories, his/her own imagination into the telling. Often, with a moving picture (a movie), possibilities are narrowed down, are more defined, there may be less room for interpretation.

Yet, even so, it’s the ability of visual art to tap into our emotions and to tell a story that makes the moving pictures so potent. Watch the short film Silent below and see what aspects of the story move you, touch you in some way.

It’s the combination of a specific story and selected images that work in concert to create mood, to draw the audience in, to move us. And the artists at Moonbot Studios show remarkable deftness when it comes to all these factors. Their stories and the characters in them resonate with us intellectually, emotionally, personally. The images capture our imaginations and very often our hearts.

Many of them intimate relationships of some sort, connections between people, between people and objects . . . each with it’s own degree of humor, sensitivity, charm.

As a boy, I always felt that movies were, in some way at least, magical. The way they could transform a mood, could help me temporarily remove myself from stress, could spark my imagination, could transport me.

“There’s always room,” claims J. K. Rowling, “for a story that can transport people to another place.” The artists at Moonbot Studios are visual storytellers who have, as they state on their website, “set out to define the future of storytelling . . .” They are certainly interested in transporting others through their work.

I think they’re doing a remarkable job and I can’t wait to see what stories they create next. They have won an Oscar, multiple Emmy’s, and numerous other awards for their incredible art. Check out their website and following them on Twitter and Facebook and YouTube.

DORIAN VALLEJO “My task . . . to make you hear, to make you feel - it is, before all, to make you see.” - Joseph … END_OF_DOCUMENT_TOKEN_TO_BE_REPLACED