Each of the Other Cool Birds you’ll find here has a story to tell. Some were created especially for this project, while others were already part of an artist’s life.

But it’s not just visual artists who are getting in on the fun. Check out the Cool Birds by these talented and accomplished Literary Artists. And be sure to visit their websites for more information about their writing and other creative endeavors. 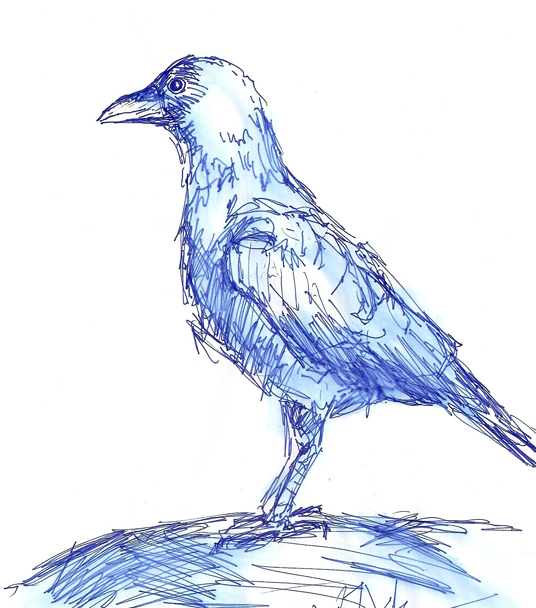 Winner of the Philip Levine Prize for his first book of poetry, The Lost Country of Sight, PhD candidate at USC, Editor of Boxcar Poetry Review (if you haven’t checked it out you should), poet, artist, translator, teacher, computer guru, Neil Aitken is a busy guy. Although he spends more time writing, translating, and editing, for Neil writing and visual art have always been intertwined. When it comes to his poetry, he states, “much of what I’ve learned about composition, framing, and contrast comes directly from my experiences in visual art.” Neil doesn’t use a notebook when writing, but says, “I frequently jot down lines and fragments on scraps of paper and the backs of business cards and receipts. . . . . Some of my best poems come about from misreading my notes or combining research discoveries in unintended ways.” Two books Neil has been involved in translating from Chinese to English, The Book of Cranes by Zang Di and the bulk of The Book of Air: An Anthology of Contemporary Chinese Poets, are slated for publication from Tupelo Press in 2013. Click on Neil’s Cool Bird and learn more about him and his work.

Technique: – “Crow” was sketched on paper in pencil, then redrawn with blue ink gel pen. A damp paper towel was used to smudge shaded sections to achieve the watercolor-like effect.

When I first encountered KL Going, it was through her YA novel Fat Kid Rules the World. It’s part coming of age, part back-stage pass to the edgy world of punk-rock. I loved it from the very first sentence. You’ve got a protagonist who is so self-aware that he views every event in his life as a headline for an imagined audience (headlines no one else is really aware of, which is such a wonderful way of presenting the emotional, self-judgmental roller coaster that is adolescence).

Like any worthwhile addiction, once I was hooked, I had to get my hands on everything I could by Kelly including Saint Iggy and King of the Screwups. But I’m not alone in my appreciation for her work. After experiencing The Liberation of Gabriel King, one young reader became a big fan of Kelly’s and later created the cardinal seen here to represent Kelly’s special affinity for cardinals and for Heinz ketchup.

In addition to having her novel, Fat Kid Rules the World, turned into a movie that has been generating a lot of buzz, KL’s latest book, a picture book titled Dog In Charge, has received a starred reviews by School Library Journal and Publisher’s Weekly and was called a rollicking romp by Kirkus Reviews. Click on Kelly’s Cool Bird and learn more about her work. 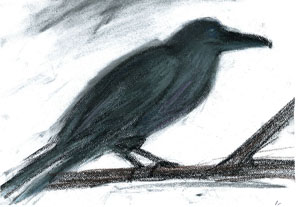 Young Adult author, Kelly Creagh and I have been friends for about eight years. To say that she’s a fan of Edgar Alan Poe is an understatement. But she’s turning her exquisite imagination, her affinity for the mysterious life of Mr. Poe (and for the even more mysterious Reynolds), and her many gifts as a writer into a trilogy of YA novels for Simon & Schuster (not a bad start). The first book in the trilogy, Nevermore, met with instant success and the sequel, Enshadowed, will be released August 28th, 2012. In her pastel sketch, Kelly has given Poe’s “raven” a bit of color which matches her playful personality. Click on Kelly’s Cool Bird and learn more about her and her writing.

DORIAN VALLEJO “My task . . . to make you hear, to make you feel - it is, before all, to make you see.” - Joseph … END_OF_DOCUMENT_TOKEN_TO_BE_REPLACED