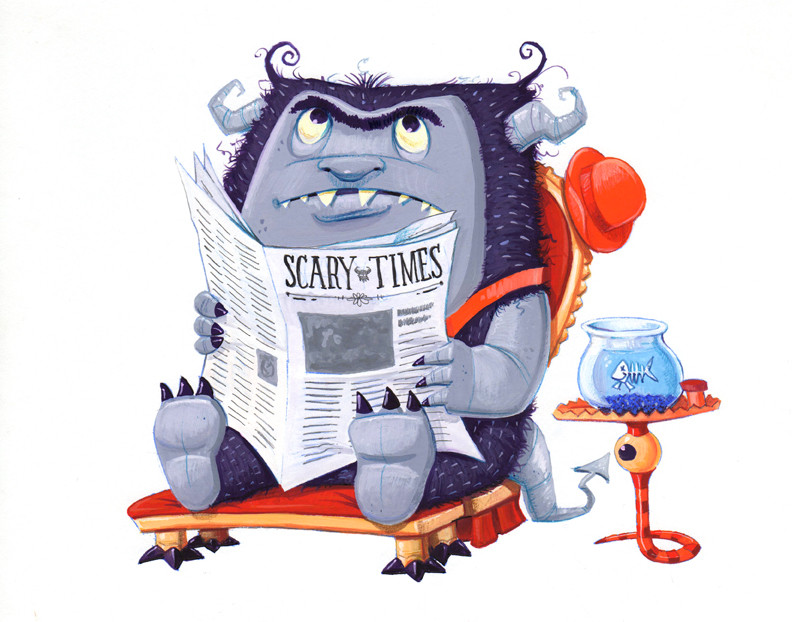 I am captivated by so many aspects of visual art, from an artist’s use of color to subtly create mood or to simply make me pause and say, “Wow!”

I’m drawn to lines and curves and the multifarious ways they are used with intention to intimate, or to define.

I enjoy juxtaposition in all its possible forms, the way it often points out things we may take for granted otherwise, the way it can be jarring to the senses, the way the often seeming discord can be stunning. I also love the creation of worlds and of characters.

Several of the artists here are illustrators whose work fly around this site do each of those things to varying degrees. I’m so excited that illustrator Russ Cox, who creates fascinating, oft quirky characters, has joined the flock. 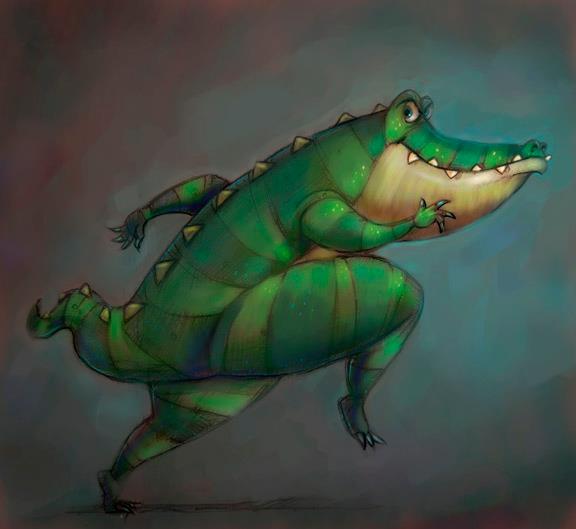 “I have this craving to draw,” says Russ. “It has always been there. Toys, sports, etc. were not that interesting to me as a child. Not that I did not play sports or had toys, I did, but I was, still am, happiest when I am drawing and painting. I never really kept a journal so I think of my art as a visual journal of where I am in my life.”

From his own interesting inventions to the playful sketches he does as bookmarks, Russ’s work employs color, juxtaposition, lines and curves used to suggest and to define.

But mostly what calls to me in his work is the joy, the whimsical nature, and the way his characters are all a bit different. After all, I’m a misfit and the more time I spend with Russ’s wonderful illustrations, I find tenderness, curiosity, playfulness, companionship, and even a little awkwardness. 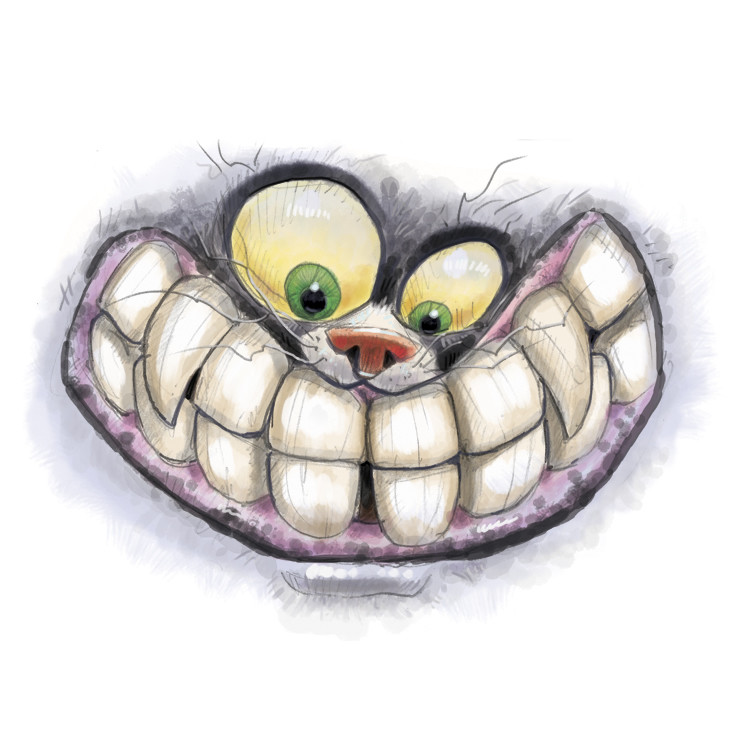 I see a bit of myself in every one of Russ’s characters. And I am reminded that, to some degree, that’s part of the true beauty of art, getting us to see ourselves in a different way and, in doing so, perhaps to see the world in a different way as well.

Below is a brief interview I had with Russ. I hope you enjoy his responses and his work as much as I do. Hey, his website is named Smiling Otis (after a cat who reminds me a little of another fictional, wide-grinned, mischievous feline), so you know he’s got a sense of humor and perhaps a penchant for the slightly askew.

“The people who create outside of the cute and perfect worlds always appeal to me,” says Russ. “If there was a twist to their art, I was sold.”

OTHER COOL BIRDS: I tend to ask everything this question, as it resonates with me as a writer. Young Adult author, Jacqueline Woodson says that writers tend to focus on the time in their lives they’re still working through. Is there an element of truth to Woodson’s claim as it relates to Visual Artists (or to your work)? If so, how? 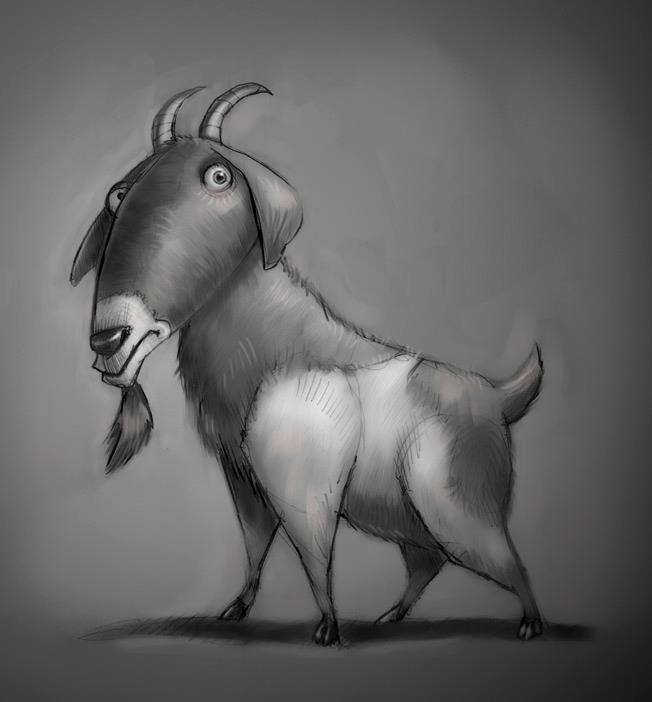 RUSS COX: I think she is spot on. I know many of things I sketch and create for myself, seem to be based on events in childhood. There are many good things from that period in my life, but there are also some tough patches. I think creating is my therapy.

OCB: I have a soft spot for robots. What technique/media did you use to create “Robot” (see gallery below)?

RUSS: Robot and Pinocchio were created on the computer. I used Photoshop at that time, but moved to Manga Studio. I have found Manga Studio faster and better for digital painting for what I do.

The funny thing is that now I have moved back to traditional mediums. I missed having dirty hands from creating art.

Bookmarks by by Russ Cox

OCB: Since you illustrate books for young readers (among other things), did you have a favorite illustration or illustrator when you were young (or now)? If so, why?

RUSS: There are a lot of artists that were an influence on me and my art. I am huge fan of Warner Bros. cartoons, especially Daffy Duck. The artists who worked on Mad, Creepy, and Famous Monsters magazines were favorites. Of course you have classic artists like Dali, Sergeant, Magritte, Sendak, Blair, Scary, Gorey, and Silverstein that I love.

OCB: You allude in your bio to acquiring an interest in music and art as you grew up and to playing your banjo now when not illustrating. What sort of relationship do you find between music and visual art? And do you ever find yourself generating ideas when you play or do you do it more for the sheer pleasure (I often find engaging in some other creative process or movement frees up thoughts and ideas)? 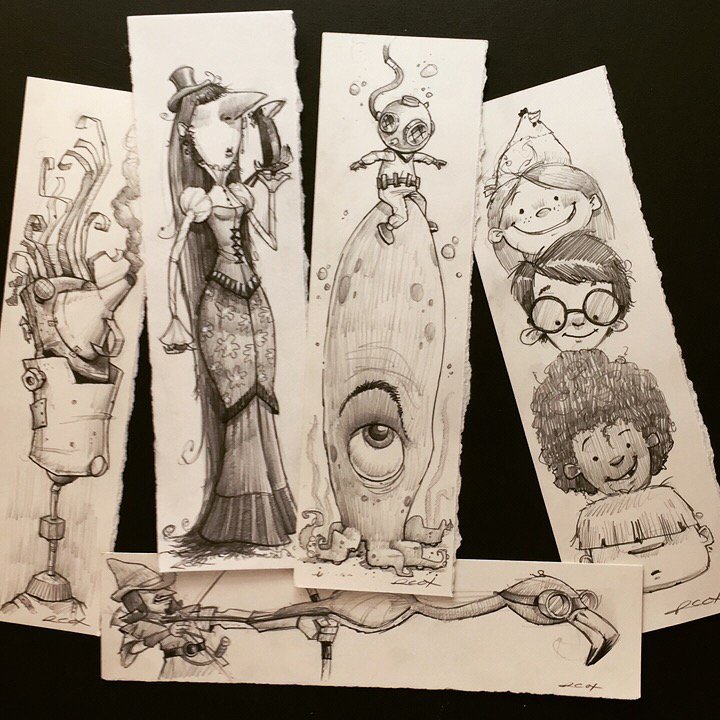 Bookmarks by by Russ Cox

RUSS: We always had music playing in the house. My Aunt Deborah stayed with us when I was young. She was always playing The Beatles, Monkees, and other 60s bands or singers. Being from Tennessee, classic country music was ingrained into my soul, so the love of the banjo comes from that.

I think that all of the arts are tied together and work hand-in-hand with each other. I know if I am stuck, I can break out the banjo and play for a while. It seems to loosen up the mind and the ideas will usually flow.

OCB: If you could work on any project (a personal one, time traveling to work with another artist, etc.), what might it be and why?

RUSS: To be a fly on the wall while John Singer Sergent is painting would be treat. He never wastes a brush stroke and is a master painter. Talking color with Mary Blair would be equally as wonderful. As far as a project, hmmmmm, let’s see. I would say spending more time on what is bouncing around my head and getting that on paper. It would be hard to want to go back and work on something that already has been published. Those books are a classic for the writing and illustration, so I would not want to mess that up.

OCB: Any exciting projects coming up for which we should keep on the lookout?

RUSS: I am gearing up for the next Puppy Pirates book while getting some new dummies off to my agent for the submission process. There are some other things in the works but I cannot talk about them yet. 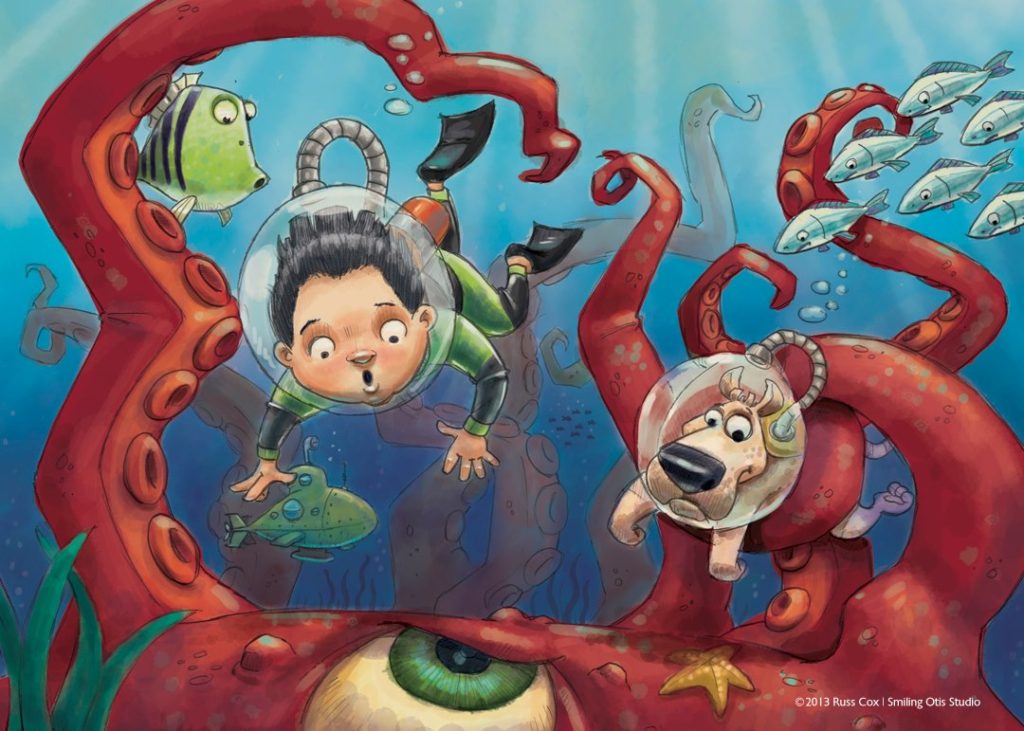 “In Deep Water” by Russ Cox

DORIAN VALLEJO “My task . . . to make you hear, to make you feel - it is, before all, to make you see.” - Joseph … END_OF_DOCUMENT_TOKEN_TO_BE_REPLACED