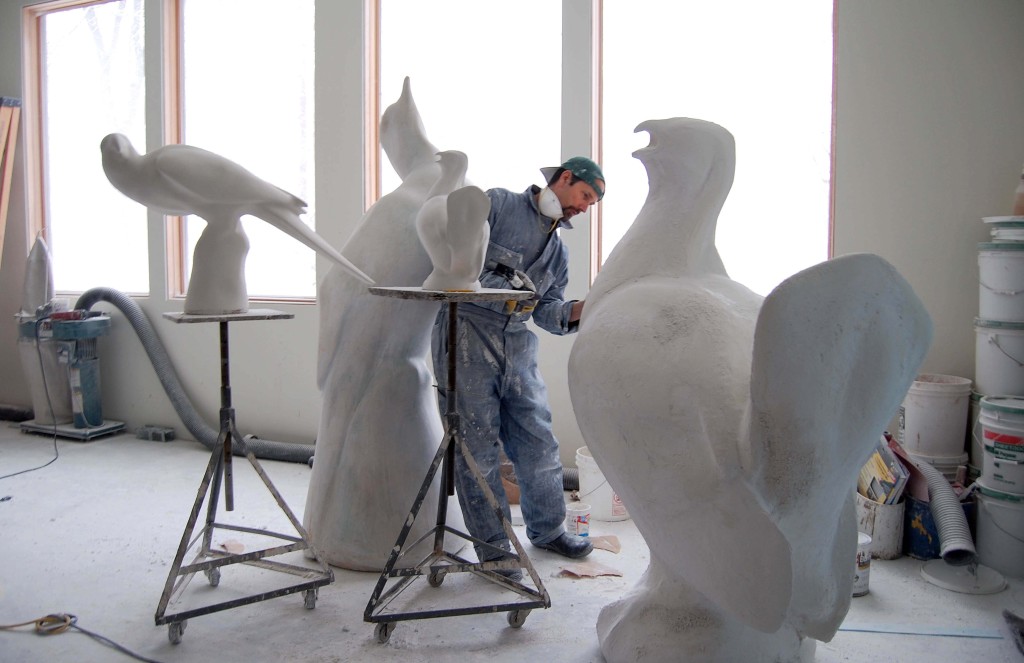 To me, ART is a special language (regardless of medium) that allows the artist to take part in a bigger conversation – one about the world, about life – and, in doing so, allows the viewer, the audience, the witnesses to the art a chance to take part of the conversation as well. 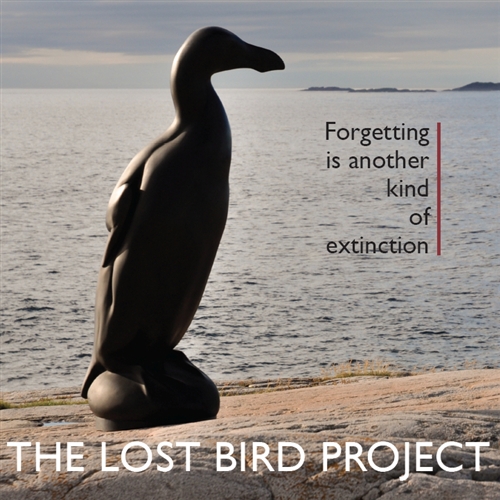 Visual art, the specific pieces highlighted here at Other Cool Birds and so many other pieces I have encountered, moves me in some way. It’s often a combination of elements – colors, subject, style, tone, a certain juxtaposition.

Most of the art found on this website, to this point, has come in the form of illustration, paintings, mixed-media, and digital work.

Today’s post, however, celebrates the work, and the passion, of an artist working mostly in three dimensions.

Todd McGrain has been a sculptor for over 25 years. He’s won a number of awards, including the prestigious Guggenheim Memorial Fellowship and he has permanent sculpture installations at several locations throughout the world.

Todd’s work certainly employs the juxtaposition of light and shadow, of textures and shapes. It also, on a deeper level, juxtaposes what used to be with what is and, in doing the latter, he illuminates the way things are today. Specifically, when it comes to five bird species that have gone extinct.

“Art is not what you see, but what you make others see.” ~ Edgar Degas

As with painter Amy Ringholz, I first encountered Todd’s work at a remarkable small museum in Corning, NY – The Rockwell Museum. Back in February, I saw that Todd was going to be giving a talk and presentation of his film The Lost Bird Project. 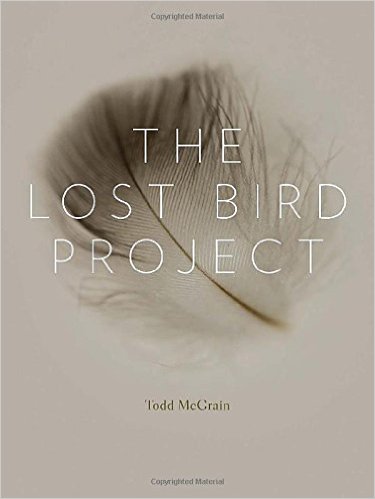 In the museum’s shop, I noticed the book that chronicles that impact of man on the world around us.

According to the book’s synopsis, “The Lost Bird Project is part natural history, part artist’s diary, documenting the extraordinary effort to place a series of public memorials to birds driven to extinction in modern times.”

The book is full of photographs documenting the process of creating bronze sculptures memorializing five bird species lost to extinction – the Great Auk, Carolina Parakeet, Heath Hen, Passenger Pigeon, and Labrador Duck – sculptures that McGrain has installed near the place where each species’ last member vanished from the earth.

One such bird, the Labrador Duck is memorialized in Brand Park where one of my poems is also currently on display.

I found the subject of extinct birds interesting. What made that even more interesting to me was the fact that an artist would be so impassioned about a cause, about the loss of entire species, that he’d dedicate his art to honoring those now extinct creatures. I admire that very much.

The book also provides biographical information about each of the birds and I love that Todd has put his sculptures in the locations where the birds once lived. 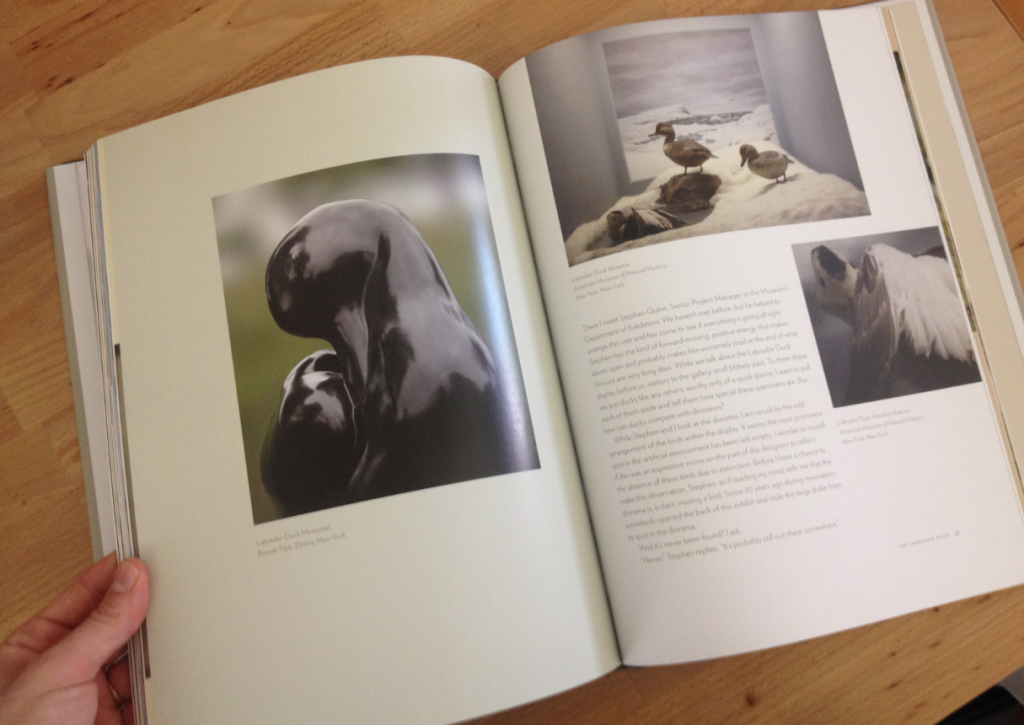 Pages from The Lost Bird Project Book by Todd McGrain

“The aim of every artist is to arrest motion, which is life, by artificial means and hold it fixed so that a hundred years later, when a stranger looks at it, it moves again since it is life.”  – William Faulkner

I believe that is what Todd is doing. He’s arresting the motion of a handful of animals that once were and, in doing so, allowing them to move again each time they are seen.

I hope you will see them here. I hope you will investigate Todd and his wonderful projects (Lost Birds & Forest Elephants) and see them even more fully, help them move again. 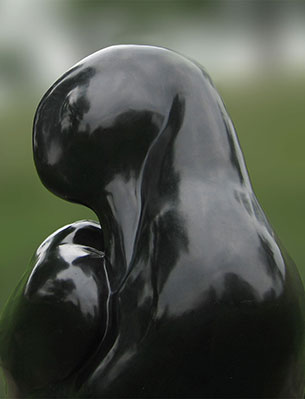 Other Cool Birds: How long have you been interested in creating art?

Todd McGrain: I have always made things as a way of understanding the world.

Even before I knew there was such a thing as “Art,” I knew that working with materials was the best way for me to learn.

Other Cool Birds: What sort of background do you have (formal training, apprenticeship, workshops, self-taught, etc)?

Todd McGrain: I have a formal art education and learned a lot from many teachers. In the end, however, I think all artists are essentially self-taught. An artist’s growth comes predominantly from personal inquiry.

Other Cool Birds: Of all things to do, what compels you to create art? 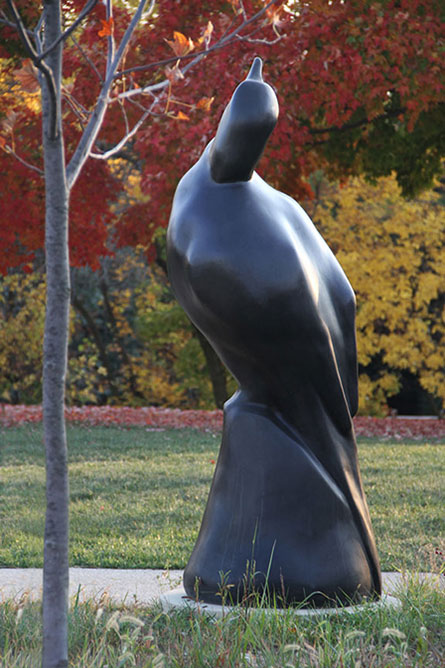 Todd McGrain: I am driven by a desire to learn and and gain understanding through creative engagement. It is the best way for me to approach any subject.

Other Cool Birds: What is it about the process that you like most? Least?

Todd McGrain: I love everything about the process of making art.

The biggest challenge is facing periods without an ongoing project. For this reason I always work on several things at once so there are no idle gaps between new initiatives.

Other Cool Birds: What sort of subjects do you prefer drawing/sculpting/exploring and why?

Todd McGrain: I don’t think in terms of subjects when I am beginning a project. My work is driven by urges and affinities that remain somewhat mysterious. I come to a subject through a very circuitous path. I am often surprised where the work takes me.

“Art is… the spirit of free people, it’s a question mark
in the minds of those who want to know what’s happening.” – Aaron Howard

Other Cool Birds: What is one thing about art you think people might not understand?

Todd McGrain: I think the most difficult thing for most people to understand about art is that artists may out-stride their original intentions and ambitions. The creative process is not goal oriented, but rather a process of learning and investigation. 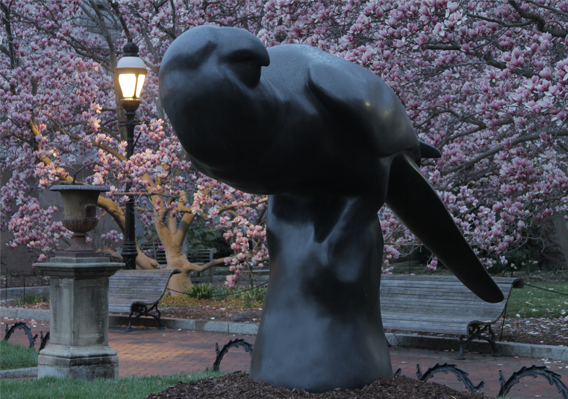 Carolina Parakeet by Todd McGrain on display at Haupt Gardens

Other Cool Birds: If you could work on any art project (i.e. working on an historical piece of art back when it was created, developing a personal idea) what might it be and why?

Other Cool Birds: Why The Lost Bird Project?

Todd McGrain: I have always loved birds and we are at risk of losing so many species to extinction.

The stories of some of the bird species we have lost have been with me since childhood. As a sculptor, memorializing these birds naturally found its way into my studio.

Other Cool Birds: Do your art subjects in general reflect your personality in some ways? If so, would you elaborate on that?

Todd McGrain: I have always been drawn to the outdoors. Urban parks, the countryside and more wild places offer a great deal of solice me.

My work, in some ways is a show of gratitude.

Other Cool Birds: You seem to work in a variety of media (i.e. sketches and sculptures of the lost birds). What different media do you work in and what technique/medium did you use to create The Lost Bird sculptures?

Todd McGrain: I enjoy working with many materials. The Lost Bird drawings have a base of ink that I blow on the paper with an atomizer. I work over this base layer with a wide range of pencils.

The bronzes are cast using the lost wax method.

Other Cool Birds: Do you have any specific upcoming projects/exhibits for which we should keep a look out?

Todd McGrain: I continue to exhibit the Lost Bird Project memorials across the country.

My current work is a film project focusing on Forest Elephants and the people who are working to protect them from extinction. My exhibits and updates on my film can be found at lostbirdproject.org.

Other Cool Birds: How can we buy a copy of your wonderful book The Lost Bird Project?

Todd McGrain: The book is available at the LBP website.

When we engage with art, we do one thing we often forget to do in our day-to-day lives. We pause. We spend time in the stillness, we contemplate, we remember, we imagine, we feel. That’s why I love art in all its many forms.

It might seem surprising that an Artist-in-Residence at the Cornell Lab of Ornithology, an artist so invested in the welfare of birds, would also be drawn to elephants (as ours has, albeit in a different way), but Todd’s latest project is making a film on Forest Elephants.

But that’s the thing about art. It’s a vehicle through which we can connect with and be part of so many bigger conversations.

“As I embark on this new initiative,” writes Todd, “I know very little about elephant language, emotions, behaviors or social order . . . . In this threatening time for elephants, The Lost Bird Project is pleased to be joining the Elephant Listening Project to help tell the story of Forest Elephants and their perilous future” (taken from Rue Des Elephants).

To learn more about Todd McGrain and his projects, visit his website here and you can follow him on Twitter. Also explore the Cornell Lab of Ornithology to learn about the Elephant Listening Project. 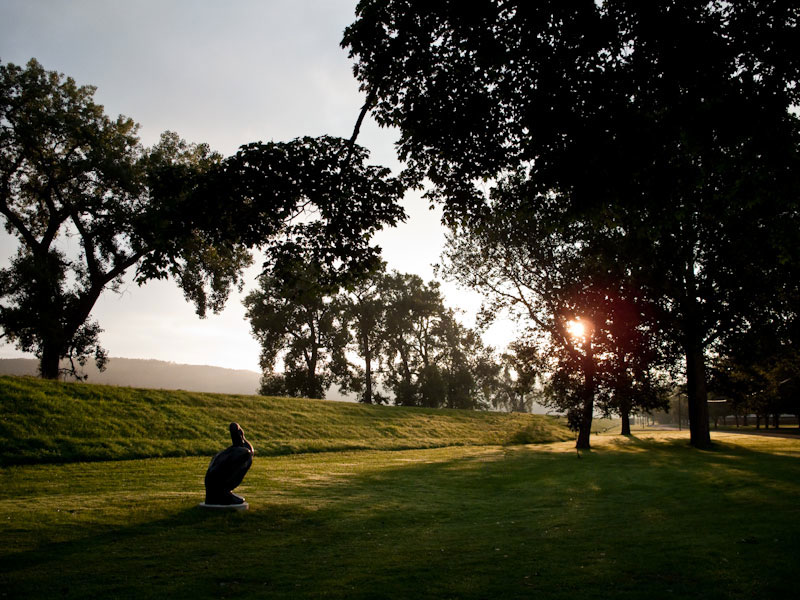 Labrador Duck at Brand Park in Elmira by Todd McGrain

DORIAN VALLEJO “My task . . . to make you hear, to make you feel - it is, before all, to make you see.” - Joseph … END_OF_DOCUMENT_TOKEN_TO_BE_REPLACED