“We are each gifted in a unique and important way.
It is our privilege and our adventure to discover
our own special light” – Mary Dunbar.

Fortunately for us, Treacy Ziegler has discovered her own special light.

In some ways, it might seem a surprise that Treacy actually became a visual artist. After all, when she was growing up, she “wasn’t allowed to draw.”

“Not because art wasn’t allowed in the house,” she continues. “Instead it was because my older sister was already the designated artist and anything I did was reduced to ‘imitation.’” Though, she adds, “I did draw secretly.” 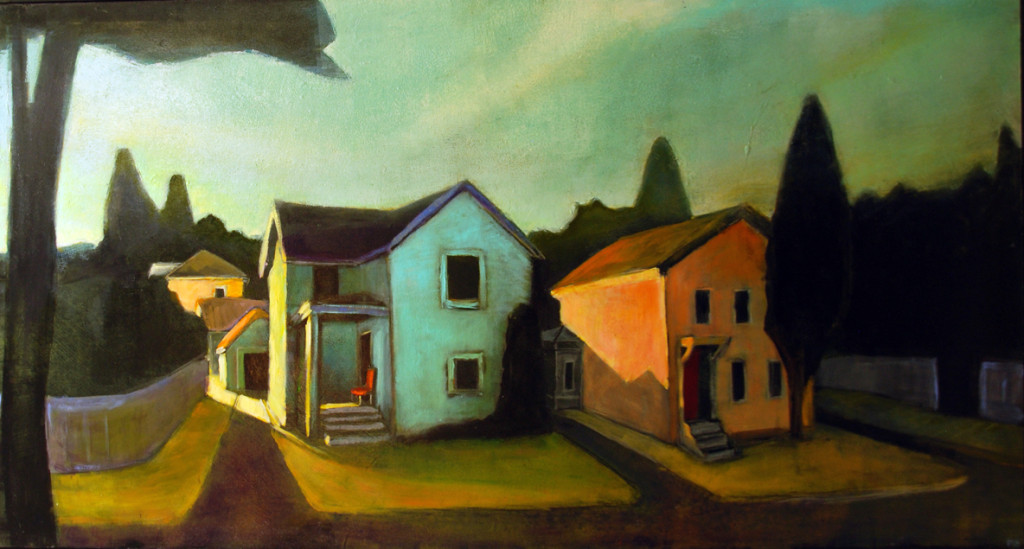 When it came to getting an education, however, she went into mental health and then on to graduate school for social work. Without intending to suggest in any way that those are less than noble and vaunted professions, I for one am glad that Treacy’s journey eventually brought her around to art.

“A Bird Flew From My Sister” by Treacy Ziegler

I grew up in a small town with an awesome art museum in the Arnot Art Museum where, it turns out, some of Treacy’s work has been exhibited.

I work in an even smaller town that is home to two world-class museums in The Corning Museum of Glass and The Rockwell Museum, as well as to several wonderful galleries, including West End Gallery when I first encountered artists like GC Myers, as well as Marc Rubin and Bridget Bossart van Oterloo.

It was there, at West End Gallery, a few months ago that I first came across the beautiful paintings of Treacy Ziegler.

At the time I thought 0 this is someone who must have had been practicing art her entire life.

It wouldn’t be until she was in her mid-twenties, though, that she’d leave social work and return to school at the Pennsylvania Academy of Fine Arts where she studied printmaking and painting for four years.

“It was in art school,” she claims, “that I finally got the encouragement lacking from family with the opportunity of winning a number of awards, including the Henry Scheidt Traveling scholarship.”

Treacy is a painter and a printmaker, but she’s also a talented writer. And as much as I enjoy using words to put these posts together, I think she best expresses the wonders of art – the special way it allows us to discover the world around us and ourselves – through her own words.

“While I learned so much about the world through social work,” she says, “I didn’t really ‘see’ the world until I started drawing it; not drawing from my imagination or feeling, but drawing the world around me and exploring relationships visually – seeing beyond the conceptual relationships I learned in social work school.” 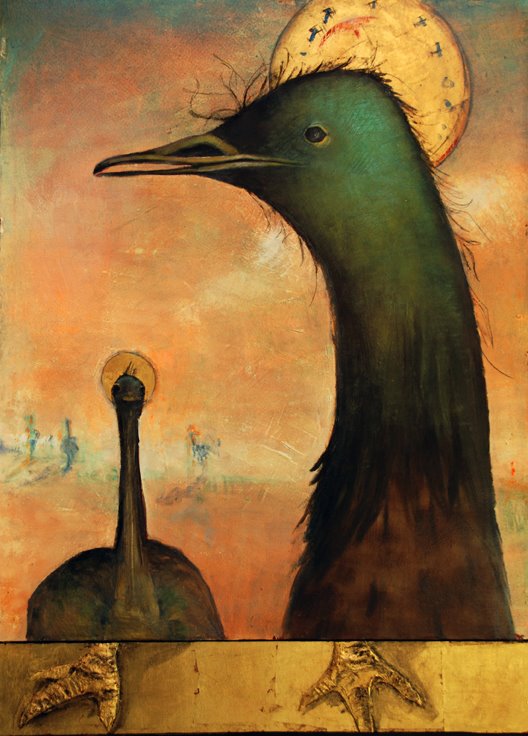 She goes on to say, “I have been married to an artist for 25 years and we have created a life of art – I understand love as a life shared in the work of art.”

For Treacy, art “has never been a career . . . in the sense that it ends at a particular time or that days are taken off” which she says reminds her of the quote from Dr. Sukuki on practicing music – “the student practices everyday the student breathes.”

“Because of this,” she adds, “I create art not for anything specific, but because it is how I access the world. It is through the primacy of perception that I want to understand the world; a tacit learning instead of one through identification or factual knowledge.

As a printmaker, I work in a labyrinth. In the process of creating an etching, light is dark and dark is light; right is left and left is right; in is out and out is in.

Even in this reversal of the visual world, I can’t see what I am doing because I am working underground; beneath the asphaltum ground in which the lines are etched.

One non-printmaking artist asked, ‘What’s it like to be always in the negative?’ Actually, in the process of printmaking, the distinction between negatives and positives collapse to where opposites do not exist. 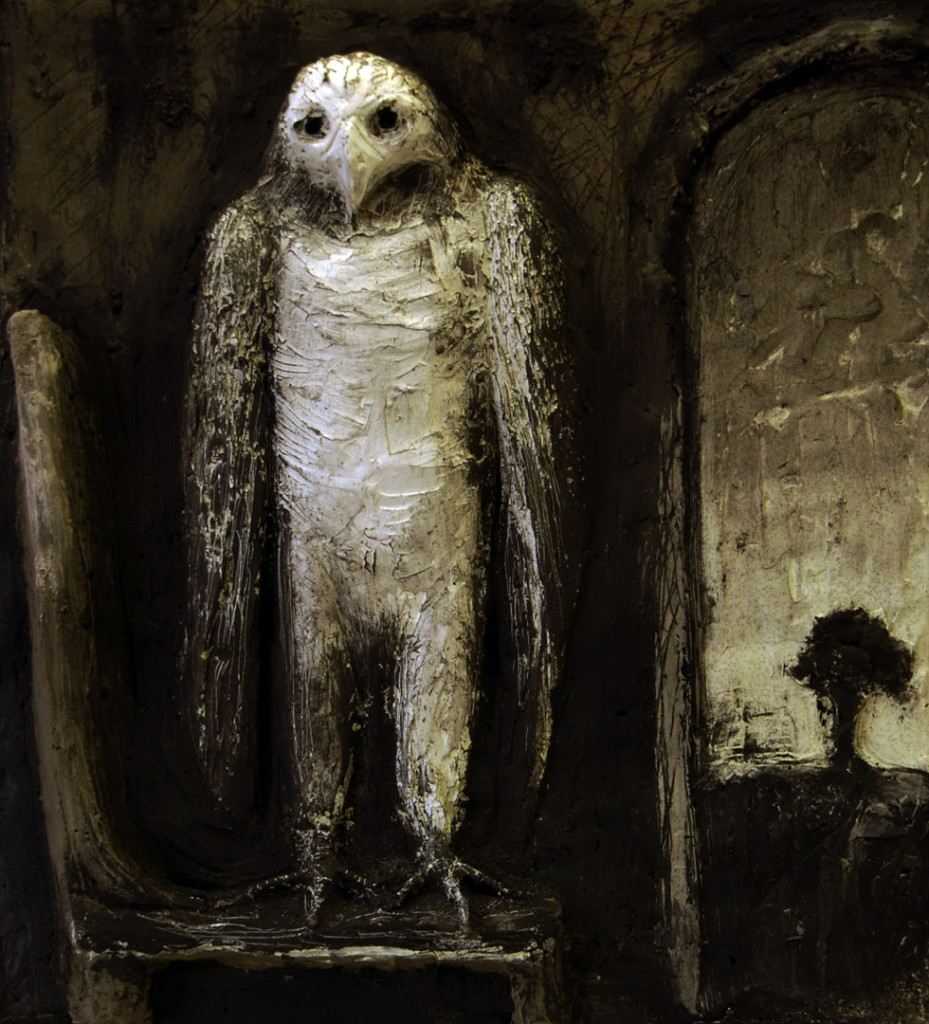 Somehow, last year I started working in sculpture and most, recently, in bronze.

I think this interest in sculpture may have occurred from drawing so much from life in the past 25 years – drawing sculpture in museums, animals at the zoo – exploring form so intensely in my drawings, that my hand needed to turn into the paper.

When the two dimensions of paper became limiting and I kept banging my hand into the paper – my hand wanted to go through the paper – to create form, I turned to sculpture.

I began modeling in clay, first modeling reliefs, keeping somewhat to a dimensional orientation. Then I started working in the round.”

Although, I am a big fan of many of Treacy’s paintings that do not have animals or birds in them (landscape pieces like “An Evening in January” which is one of my favorites, though I could only find it online in the small size to the right), Treacy does often paint and sculpt birds which certainly fits with the unifying thread of this website.

“An Evening in January” by Treacy Ziegler

When asked about the subjects she most often works with, Treacy responded:

“I like creatures; noting that the word ‘creature’ suggests a being as created; often occupying that space of ambiguity between humanly and non-humanly; the space created by those who do not fit into identification; the boat out of water, the prisoner without a home, the bird forgetting how to fly.”

You can read her essay “Animals in Our Unlikeness.”

“When I first started drawing birds,” Treacy continues, “my sister responded with the typical association, ‘Wow, birds always evoke a sense of freedom.’ My mind said, ‘Not free,’ thinking of the small birds, the woodpecker, the robin; their necks broken from flying into my windows, lying in my freezer next to the dead chicken I buy from the store. 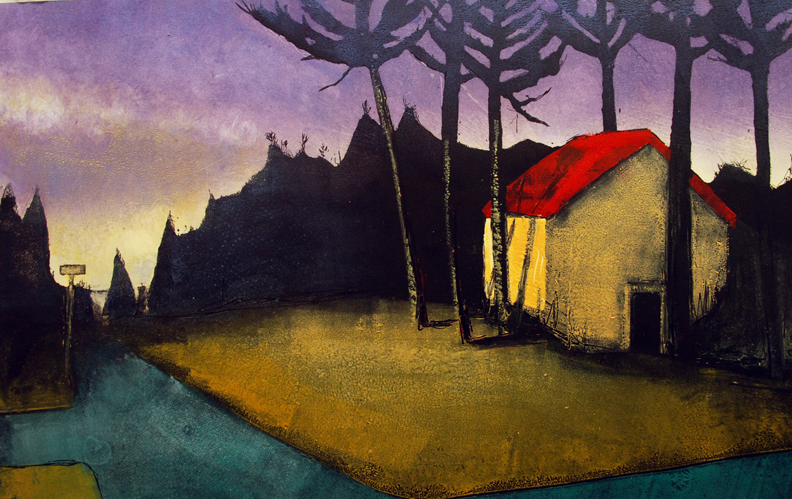 “Intersection” by Treacy Ziegler at the Chase Young Gallery

A few years ago, and before I started the project with prisons, I was walking on the Cornell University campus. In the atrium of one of the buildings, I came upon about 200 mounted birds in glass cases.

The birds were visually intriguing. The chatter of freedom was not an element.

It was the birds’ silence, their form, and how the light hit the form that commanded my fascination and that if the birds had been living birds, they would not have had such power over me.

I started drawing the birds not knowing what, if anything would come from these drawings.

Eventually, the drawings evolved into paintings – paintings not of birds in natural settings but birds displaced, somewhere else, birds in an undefined world.

“The Visitor” by Treacy Ziegler

‘Like birds that get used to walking
And grow heavier and heavier, as in falling;
The earth sucks out of their long claws
The brave memory of all
The great things that happen high up.’     – Rilke

The birds in Rilke’s poem,” Treacy adds, “like the birds in the atrium are bound to earth and disconnected from the sky.

The birds I find myself painting are the large birds, the cranes, the herons, the emu, the ones whose size suggests flight is a burden and, as such, they mock the mockery associated to birds used in the propaganda of freedom.

It was about a year later,” she adds, “that I created the project with prisons exhibiting my work in prisons (you can read her essay – “What The Warden Doesn’t Know”).

“What do you think most people might misunderstand about art?” I asked her.

“I think,” she replied, “lots of people think of art as representation – that art represents feelings, a person, a place, an emotion; that art is a depiction of these. But strong art is never the handmaiden of something else – never an entity that points to another thing and says ‘I represent that.’

Art becomes an experience in and of itself – for both the viewer and artist.

I don’t believe that art is ‘self-expression,’ – again suggesting that art becomes a tool for feelings. Someone referred teasingly to his artist friend as an egomaniac – this artist becoming so popular in Philadelphia. I replied that his ego really didn’t matter; in art, the artist’s voice is but a small single voice in a large choir. Marks and materials have voices of their own and listening to those voices is necessary for strong art.

“We All Live By The Lake” by Treacy Ziegler

When asked what media she works in, Treacy states that she explores “different mediums in the pursuit of the naïve. The problem,” she adds, “with experimentation in a medium that I have done for years – like printmaking – is that what I do will always be compared to what I did; not only by the viewer, but also by myself. Working in a new medium gives me a kind of freedom. I am not burdened by my own or others’ expectations. 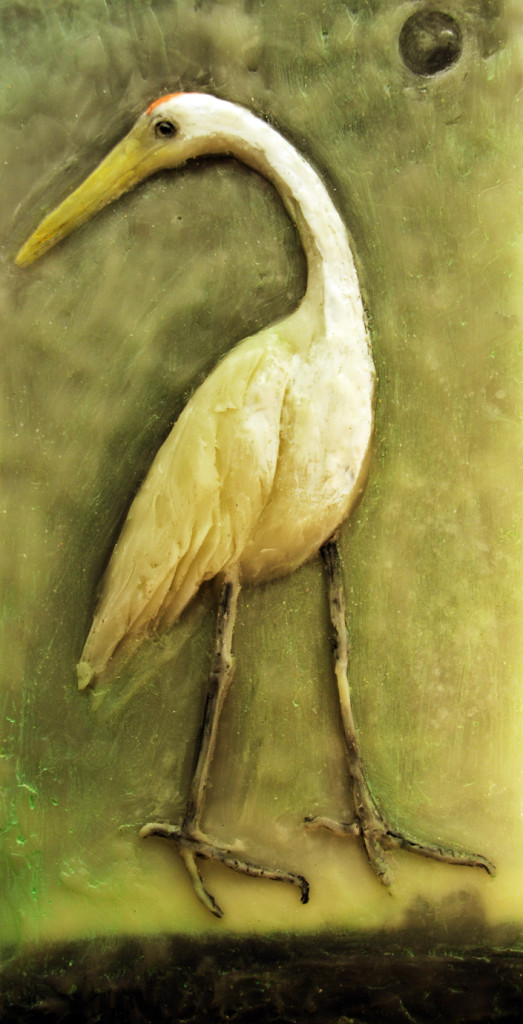 For instance, in bronze, I have the freedom to work the surface as a painter in a way that my husband, a bronze person who has worked in bronze for years, could never do. Could not do because ‘it isn’t done that way.’

The burdens that we placed upon ourselves are shed through ignorance. Being naïve, therefore, is very good in art.”

Treacy is very excited about an upcoming solo exhibition at the Morris Graves Museum in Eureka California.

“Morris Graves is a big inspiration to me and I am humbled to be able to have this exhibition in a museum in his honor. I will work mostly in bronze – bronze birds. The work is informed by my experience in prisons.”

To learn more about Treacy and her wonderful art, visit her Treacy Ziegler Artist Website. Or follow these links to learn about her prison project or her essays published in Broad Street Review.

One of my favorite statements from Treacy which I think is especially evident in her landscape paintings is one I came across on the Gallery 71 website:

“I guess,” she says, “if I were to single out the one important thing to me in a painting, it is the element of fleeting light surrounded by darkness and the interplay between the two. After this relationship comes color and then form. From these elements, the narrative naturally evolves.”

I love the way her use of color seems almost minimal at times, present only when and where needed, as it reminds me of childhood days and evenings spent at my grandparents house. I also love the way she is able to juxtapose that light and darkness in such profound ways.

DORIAN VALLEJO “My task . . . to make you hear, to make you feel - it is, before all, to make you see.” - Joseph … END_OF_DOCUMENT_TOKEN_TO_BE_REPLACED