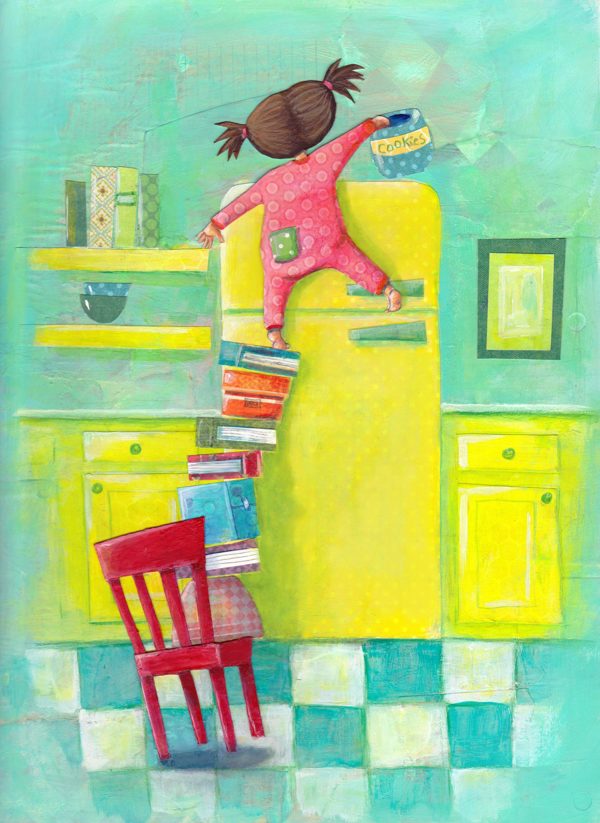 Vanessa “Nessa” Roeder’s art has a sweetness to it, and a seeming simplicity that’s difficult to pull off, and an indelible playfulness – whether it’s “Robots at School” (below) or her various animal illustrations or the determined little “Cookie Snatcher” to the left.

And the Cookie Snatcher is a perfect example of the way I’m touched by the delightful colors and the way they work together, but also by the character Nessa has created, the protagonist of this particular visual narrative.

I get a sense for the Cookie Snatcher’s personality in her actions and in the scene depicted, but also through the specific images and shapes Nessa has included and, again, in the colors she has chosen.

I love paintings like Elephant (found in her Wild Animals portfolio) because of the wonderful juxtaposition of colors, and the exaggerated shape of the elephant, as well as that sweetness and playfulness mentioned earlier, and the freshness of the overall painting. 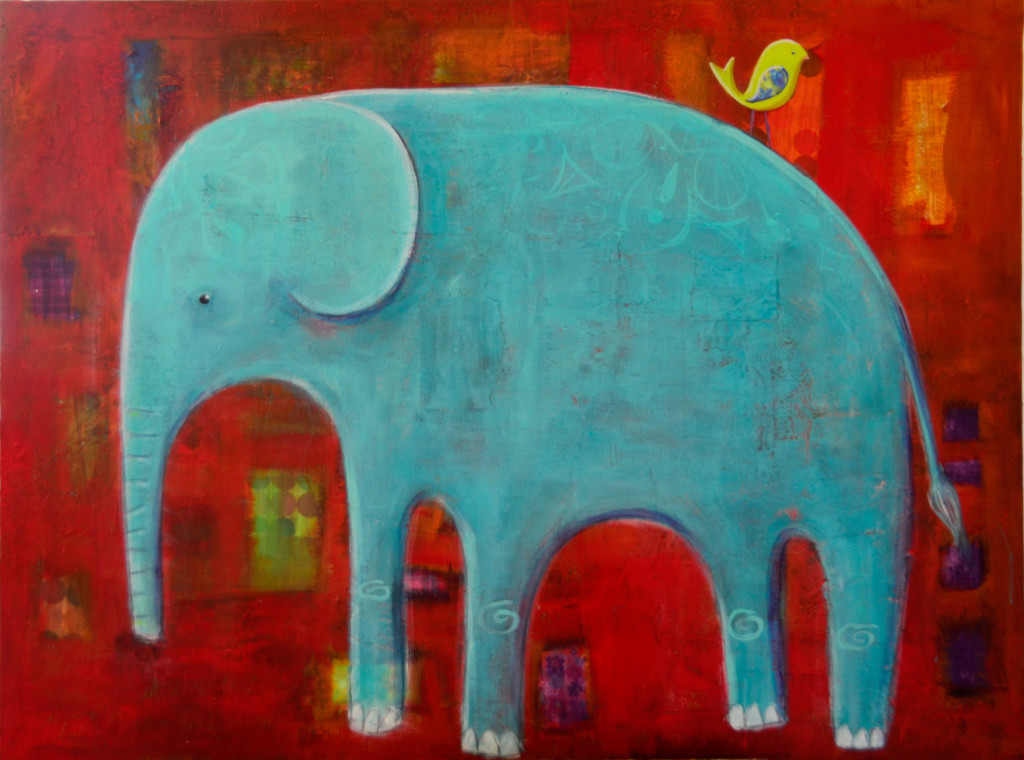 As with several of the artists on Other Cool Birds, Vanessa Roeder seems to have been born into the life of an artist.

“Some of my most precious memories,” says Nessa, “are sitting at a desk alongside my grandfather as we went step-by-step through How to Draw books.”

Her grandfather would have projects waiting for her. “One day we might be working with charcoals, another day it was pastel chalks or watercolors. He would cut interesting pictures out of magazines and newspapers and stick them in a folder for future drawing projects. I still have that folder of pictures in my studio, along with some watercolor sets he bought each of his grandchildren.”

Yet hers was the only set that had been used.

On one hand it’s really no wonder that Nessa has had a love for art ever since she was old enough to hold a crayon.

On the other hand, the fact that hers was the only watercolor set used suggests that her grandfather’s, and her mother’s passion for art, may not have been as contagious as we might expect. After all, none of the other grandchildren caught the creative bug.

If you spend some time with her art, though, you’ll see that maybe there was another reason Nessa was the one who took up the torch (or the brush, as it were).

Maybe her calling to be an artist was also the result of her own prodigious talents trying to find their way out. Maybe there was no other way for those colors splashing around inside her, and that inescapable playful spirit, to manifest themselves. 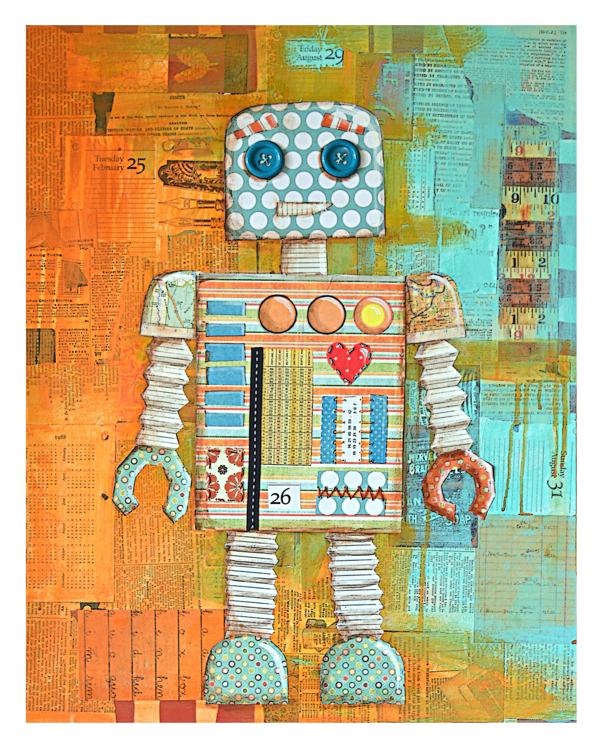 I’ll admit, before starting Other Cool Birds, I never spent much time observing mixed media art. Mostly because I never really encountered it. I simply enjoyed paintings and sculptures at galleries and museums.

But with artists (and friends) like Sandy Spencer Coomer working with an assortment of media, I’ve come to truly appreciate the creativity involved and the beauty of those creations.

And Vanessa Roeder’s work with mixed media is also wonderful, like Augie Bot (left) – the patterns and textures and colors, yes, very much so, but also I keep going back to the sweet and playful personalities of the characters.

“My use of mixed media.” she explains, “developed after an obscure little collage assignment in a painting class I took. The addition of paper to the painting added so much yummy texture. I started playing around with patterns and textures, buttons and thread, and I haven’t looked back since. My favorite thing about using mixed media is that it creates many little hidden gems in a painting that might not be seen with the first glance, but when you observe more closely, you start to discover these secondary stories.”

I’m drawn to juxtaposition, to discordant angles and textures working in concert to not only create a visual effect, but also an emotional one. So perhaps it’s the textures in Nessa’s work that appeals to me. Perhaps it’s those “secondary stories” that she suggests arise from the layers, as I’m always intrigued by stories and by character and her work is rich with both.

When you visit Nessa’s website (hint, hint, you’ll want to visit), take your time and savor the textures, the colors, and that refreshing sense of whimsy and playfulness.

You’ll find that she likes to create robots and birds, though she admits she’s not entirely sure why. Only that she can depend upon them.

“If I’m ever experiencing artists block,” she says, “they’re my default. I’ve never made a robot bird, though. Perhaps that will be my next project.”

I for one look forward to the robot bird and to the other wonderful pieces Nessa makes in the future.

Who by Vanessa Roeder

Technique: “Who” (seen to the right) was created using acrylic paint, scrapbook paper, calendar and book pages, and ink.

I wonder if mixed media art strikes a cord to some degree because there’s this underlying sense of familiarity with the objects being used. Maybe it’s the result of the artist’s ability to perceived common, everyday items in such new ways. Maybe it’s the delicious juxtaposition of familiar and different that I find so compelling.

I’m not sure I have an explanation just yet.

As an artist, Nessa is drawn to mixed media for a few reasons.

“I love a lot of texture in my pieces,” she says, “and I like the messy process of working with torn paper and paint.”

Of course it’s not just her mixed media work that resonates with me. It’s also her paintings and her illustrations and her sketches.

To learn more about Vanessa Roeder and her art, visit her website and her blog (where you can even see sketches transform into colorful illustrations) and her shop.

DORIAN VALLEJO “My task . . . to make you hear, to make you feel - it is, before all, to make you see.” - Joseph … END_OF_DOCUMENT_TOKEN_TO_BE_REPLACED